‘No deal’ for Britain on Brexit is unlikely, says David Davis 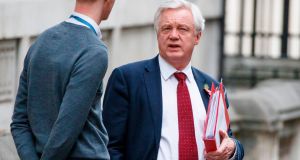 Britain’s Brexit minister David Davis talks with a member of staff as he leaves his office in Downing Street. Photograph: Tolga Akmen/AFP/Getty Images

Britain expects to agree a “basic deal” on leaving the European Union, even if the article 50 negotiations end in failure, David Davis has told a parliamentary committee. The Brexit secretary told the House of Lords EU committee that he thought what is commonly described as “no deal” is improbable.

“But if we end up with no deal, in my mind, that tends to mean no free trade deal and no customs arrangement to go with it. That’s the primary thing we lose. And what I don’t think is that we’ll end up in a circumstance where there is no agreement over a number of fairly fundamental issues. Take aviation, for one. I think, whatever happens, we’ll have some sort of basic deal. So my view of no deal is some sort of basic deal without the bits we really want,” he said.

Mr Davis said negotiations in Brussels will resume next Wednesday, blaming the EU for dragging its feet. EU leaders said in October that sufficient progress had not been made on the divorce bill, citizens’ rights and Ireland to move on to discussions on trade.

The Brexit secretary said Britain was “pretty much absolutely” committed to ensuring that the Irish Border remains invisible after Brexit. But he said the future of the Border depends on the outcome of talks on Britain’s future trade relationship with the EU.

“If we achieve an outcome, as we hope to, which maintains tariff-free trade, then maintaining an invisible Border will be relatively easy ... If we end up with a tariff arrangement, then we’ve got a real problem and dealing with that is difficult,” he said.

Mr Davis acknowledged that the EU feared Britain was seeking to use the Irish Border issue to secure more advantageous trade arrangements with the entire union. He said that was not Britain’s intention but that his government was concerned that the broader trade deal would affect what happens in Ireland.

“If we get a free trade arrangement which is tariff-free across all goods, we get a regulatory arrangement on agriculture, which is probably the biggest single issue on that border, phytosanitary standards and so on, then this becomes a relatively straightforwardly soluble problem,” he said. “If we don’t have those, we’ve got much bigger problems to deal with.”

Mr Davis said that one reason Britain agreed to the EU’s preferred sequencing in the negotiations was to protect the Common Travel Area. He said it was important to discuss the reciprocal rights enjoyed by British and Irish citizens in the broader context of EU citizens’ rights after Brexit.

“The principle of the [Common Travel Area] was challenged at first because the union were worried that this might have an impact on other elements or set the wrong precedents for other elements of citizens’ rights,” he said.

Earlier Mr Davis told the cabinet that Britain had already spent £500 million on preparing for Brexit and expected to hire at least 8,000 new government workers to deal with it by the end of next year. He said about 300 new programmes were under way across government to prepare for different negotiating outcomes, including “no deal” for various policy areas.

Downing Street said in a statement after the cabinet meeting: “Alongside the negotiations in Brussels, it is crucial that we are putting our own domestic preparations in place so that we are ready at the point that we leave the EU. Cabinet heard many of these will be needed even in our preferred scenario of a bold and ambitious deal – for example, implementing either of our proposed customs arrangements will require investment in new systems and customs officers.”

1 Johnny Depp: Ex-wife or friend defecated in bed in ‘fitting end’ to marriage, court hears
2 Brightest comet of the century visible in Irish skies for the next week
3 Reopening of pubs that do not serve food may be delayed beyond July 20th
4 Delicious details of Mary Trump’s book open up world of president’s family
5 Man tried to steal cars while high on crack and holding chihuahua
Real news has value SUBSCRIBE