Bank said it had received ‘regulatory and political clarifications’ on Brexit 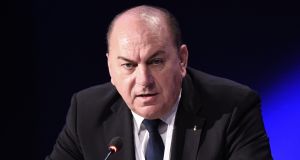 Axel Weber, chairman of UBS, warned in January that as many as a fifth of UBS’s 5,000 staff in London might have to move to the EU if the UK loses access to the common market. Photograph: Olivier Douliery/Bloomberg

UBS has received “regulatory and political clarifications” that make it “more and more unlikely” that the Swiss bank will end up moving 1,000 jobs from London after Brexit, its chief executive said on Friday.

Chairman Axel Weber warned in January that as many as a fifth of UBS’s 5,000 staff in London might have to move to the EU if the UK loses access to the common market.

Chief executive Sergio Ermotti told reporters on Friday that UBS would finalise its Brexit plans “in the next few weeks”.

“The 1,000 [job moves . . . is becoming in the last few months more and more unlikely . . . because we got also some regulatory and political clarification about what we need to do,” he added.

Mr Ermotti said UBS already had all of the licences it needed in its EU bank in Frankfurt to continue all its EU businesses after Brexit, but that the bank’s target was “to keep as many people as we can in London”.

He was speaking after Switzerland’s largest bank by assets reported third-quarter results that beat analysts’ expectations in almost all divisions and were praised by analysts as “solid”.

Group-wide profits were up 16 per cent on an adjusted pre-tax basis, to SFr1.5 billion ($1.5 billion), versus the SFr1.297 billion analysts had forecast. The shares were down 0.8 per cent at midday in Zurich, having been up slightly.

UBS Wealth Management Americas (WMA) missed forecasts for the second quarter in a row, posting adjusted pre-tax profits of SFr351 million for the three months to September 30, versus the SFr361 million expected and SFr367 million for the same period a year earlier.

At the investment bank, overall profits beat expectations and last year’s results, but the trading business struggled with the same low volatility that affected the big US banks and Barclays and Deutsche Bank in the third quarter.

“We feel very comfortable about the risk-adjusted return in capital employed in our business,” said Mr Ermotti, adding that 60 per cent of its fixed income business was foreign exchange, where market-wide revenues had fallen fastest for the quarter.

A sweeping restructuring in 2012 has meant that fixed income now makes up a far smaller part of the bank’s business – the 37 per cent fall equated to just SFr175m of lost revenue against total revenue in the quarter of SFr7.145bn.

UBS more than doubled revenue from its equities capital markets division to SFr283m, and posted an adjusted return on equity across the investment bank of 15 per cent.

In its main wealth management business, UBS attracted net new money of SFr4.6bn, despite SFr5bn of outflows linked to the introduction of fees on euro deposit concentrations and cross-border outflows. Adjusted pre-tax profits were SFr701m, against expectations of SFr676m and SFr641m a year earlier.

UBS highlighted the “risks to client sentiment” from geopolitical tensions and macroeconomic uncertainty.

1 Getting out from under ‘never-ending’ Celtic Tiger debt burden
2 Pensions: Estonia plans to unleash a potential €4.85bn on economy
3 Brittany Ferries ends Cork-Santander route
4 Explainer: what is the row about SF’s multinational tax plan?
5 Banks withdrawing from ATMs – another failure of regulation
6 More affordable iPhone 11 is unlikely star of Apple earnings
7 Britain after Brexit will not be alone, but it will be lonelier
8 Fair Deal nursing homecare leaves little for bills and gifts
9 Brittany Ferries announces new services to Spain and France from Rosslare
10 Money matters: ‘My father embarrassed us with his haggling’
Real news has value SUBSCRIBE