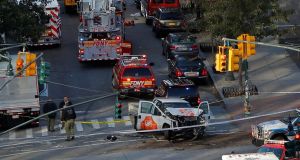 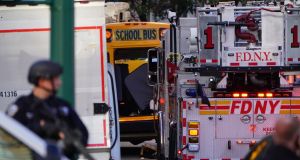 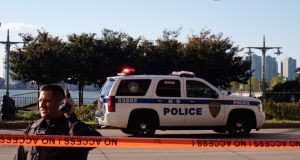 Police gather at the scene after reports of a truck driving through a bike path in lower Manhattan, New York City. Photograph: Andy Kiss/Getty Images 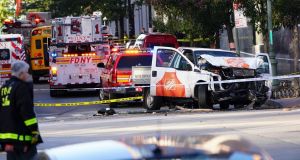 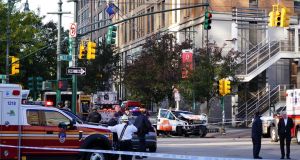 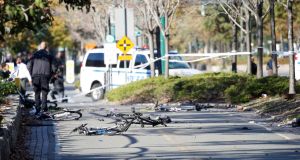 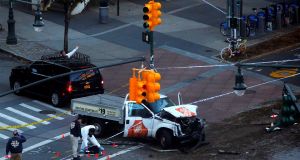 At least eight people are dead and numerous people are injured after a motorist drove as many as 20 blocks down a busy bicycle path in New York on Tuesday and struck several people, then emerged from his vehicle screaming and holding two imitation firearms.

The driver was shot by police after jumping out of the rented Home Depot vehicle and was taken into custody.

The incident in lower Manhattan was being treated as a terrorist attack, two US government sources said.

The FBI has joined the New York City Police Department in investigating the incident.

“He [the driver] jumped out of the truck with a pellet gun, yelled, ‘Allahu Akbar [Arabic for ‘God is great’],’” a law enforcement official reported. Both the pellet gun and a paintball gun were recovered at the scene.

New York City police commissioner James O’Neill said at a news conference that the driver was a 29-year-old man. He confirmed that the driver’s statement on exiting the vehicle enabled officials “to label this a terrorist event”.

The suspect was later named as Sayfullo Saipov, an Uzbek national with a Florida driver’s licence. Police said he was expected to live.

New York police said the vehicle entered the cycle path that runs alongside the Hudson River on West Street a few streets from the World Trade Centre memorial before striking at least 15 people, leaving mangled bicycles behind.

The New York City Police Department, in a post on Twitter, said that the van also struck another vehicle, then the driver “got out displaying imitation firearms and was shot by police”.

The vehicle the van crashed into was a school bus. Two adults and two children were injured in that crash.

After crashing into the school bus, the truck eventually came to a rest near Chambers Street, facing eastbound.

Currently there is one person in custody. No others outstanding. All information is preliminary as the investigation is ongoing. pic.twitter.com/nsaUgZ8MJH

The vehicle continued south striking another vehicle. The suspect exited the vehicle displaying imitation firearms & was shot by NYPD

In NYC, looks like another attack by a very sick and deranged person. Law enforcement is following this closely. NOT IN THE U.S.A.!

The driver, who was shot several times, was being treated at a nearby hospital.

The police said they were not looking for additional suspects.

A large section of the West Side Highway was closed for investigation as hundreds of officers, including the bomb squad, responded to the scene.

He said the attack was “aimed at innocent civilians going about their daily lives” and “eight innocent people have lost their lives and over a dozen more are injured”.

New York governor Andrew Cuomo said the cycle path incident was a “lone-wolf” attack, and there was no evidence it was part of a wider plot.

One witness, John Williams, a 22-year-old student, told reporters at the scene that he heard about five gunshots before seeing a large man with curly hair being taken into custody. “He seemed very calm,” Mr Williams said. “He was not putting up a fight.”

The police have not confirmed any gunfire besides shots fired by officers.

An eyewitness told ABC Channel 7 that he saw a white pickup truck drive south down the bike path alongside the West Side Highway at full speed and hit several people.

The witness, a man identified by the name “Eugene”, said bodies were lying outside Stuyvesant High School, one of the city’s elite public schools.

Students at Stuyvesant High School reported that they saw a man shooting from a pickup truck, and then saw the truck turn and strike a school bus.

Several nearby buildings, including the high school, were placed on lockdown during the incident.

She said: “Our thoughts and prayers are with all those affected.”

Mr Trump later tweeted: “In NYC, looks like another attack by a very sick and deranged person.”

He said law enforcement “is following” the attack closely before adding: “NOT IN THE USA!”

Vice-president Mike Pence also said those responsible for the attack “must be held accountable”.