David Crockett and the Border farm split by the wild frontier

With land straddling Derry and Donegal, Brexit could spell big trouble for his business 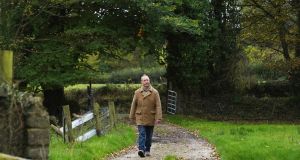 David Crockett, whose farm at Coshquin Road straddles the Derry-Donegal border, on the Northern Irish side of his land. Photograph: Trevor McBride

When you ask Derry farmer David Crockett what Brexit might mean for him, the answer is clear.

Standing at the farmyard gate, with the ancient hill fort of Grianán an Aileach looking down from the hills beyond, it’s impossible to tell where one county – or one jurisdiction – ends and the other one begins.

Instead, Crockett has to point the Border out.

“That green field in front of us, that’s in the North, and the one beyond it – the yellow one – that’s in the Republic,” he says.

His family – distant relatives of frontiersman and politician Davy Crockett, who died in the Battle of the Alamo during the Texas revolution in the 1830s – have been farming this land since before a Border was even a notion in Ireland.

Crockett’s grandfather, who like many others moved into Derry from Donegal in the 1900s to work in the city’s shirt factories, bought the land in 1911.

When Ireland was partitioned in 1921, so too was the family farm.

“When partition came my grandfather went into those fields there to bring the cows in, and there was a policeman standing at the gate,” Crockett says.

“He said to my grandfather ‘That’s the last time you’ll do that’, and from that day on he had to close off that gate.

“It was just like Brexit, because nobody knows what’s happening or what’s going on ... Partition affected him hugely because he ended up effectively with two farms, and that’s how I have to operate still.”

His grandfather had to buy livestock on both sides of the Border, and keep the animals – and their produce – on the respective side of the line. To this day Crockett has drawers in his desk labelled “NI Sheep” and “RoI Sheep”.

Crockett recalls his father having to pay a fine to get his tractor back after it was seized by customs officials.

“The Border meant you had to duplicate everything,” he says. “If you went across with a tractor you could have been stopped by the Free State customs for illegally importing a tractor, so for the farm out there we had to keep the machinery out there.

“You could have kept the tractor here [in the North], but you had to go through the customs post at nine in the morning and be back in again before five, and farming doesn’t work that way.

“Sometimes my father was caught, and the tractor taken in, and he had to pay to get it back out again, simply because he’d been working late and hadn’t got back across the Border in time.”

The Crockett farm overlooks the main Buncrana Road, which runs from Derry out to the Border at Bridgend. Just below them is Coshquin, once the site of a huge British army checkpoint.

In 1990 local man Patsy Gillespie and five soldiers were killed when he was forced by the IRA to drive a car containing a bomb into the barrier.

During the Troubles a whole network of minor, “unapproved” Border roads were closed off with spikes or concrete blocks, or simply blown up to prevent unauthorised crossings – including the road at the end of Crockett’s lane.

I’d met English people who said they were voting out. They said ‘What border?’ and thought I was a stupid Irish man

“In the 1970s they put the spikes on, simply because they [the IRA] used to shoot from the road down at the army in the checkpoint, and then it was easy to get away over the Border in a car,” he recalls.

The spikes are long gone now, and the only indication that a driver has crossed the Border is the change in the road signs.

With both Ireland and the UK part of the European Union, Crockett was able to move between both farms with greater ease.

“I have cattle out in the Republic which are Free State cattle, but I have the silage in here in the North, and I can put it into the feeder wagon and go out and feed them with it in the morning.

“Before we were in Europe I couldn’t have done that ... Everything is regarded as European, so even when the inspectors come and look at your crops, they’re all working to the same European standards.”

Crockett is a unionist – although he votes SDLP in local council elections “because a unionist wouldn’t get in here” – and he voted to remain in the UK’s Brexit referendum last year, and his father did the same.

“My father was 93, and I had to get him into a wheelchair and take him in to vote,” he said. “I’d just been on a cruise with my wife for our 25th wedding anniversary, and I’d met all these English people who said they were voting out and who didn’t believe me when I talked about the impact it would have on people living on the Border. They said ‘What border?’ and thought I was just a stupid Irish man.

“I came home and told my father ‘They’re going to vote out’, and he said ‘They couldn’t’, and I said ‘Well, every vote will count’. So he said, ‘You get me into a wheelchair and I’ll go in and vote’. He was determined to vote because he knew the implications. He’d lived through it before.”

Crockett is still incredulous that any farmer in Northern Ireland could have voted to leave the EU.

“I told them it was like a turkey voting for Christmas, and I think they’re starting to realise that now. I think if there were elections tomorrow they would vote to stay in.”

The best part of 18 months on from the Brexit vote, Crockett still has no idea how the Border will work when the UK leaves the EU. That uncertainty, he says, has become a feature of daily life.

“I think it will be disastrous for agriculture in the Republic.”

Does he see any way of making it work?

After more than 100 years, the Crockett family may be forced to pick a side of the Border, although their choice may be dictated as much through circumstance as through Brexit.

“My son is farming now and most of our ground is in the Republic simply because the city is expanding out to us so the land is all building land,” he says. “Even the other day, people were out asking about putting roads through here.”

Crockett says he does not want to leave his land and farm somewhere else.

“I’m happy living here, where I’ve always lived, and my son will farm out in the Republic,” he says. “I have known nothing else than this Border here.”