Report predicts Irish agricultural exports to the rest of the world could fall by $6.5 billion 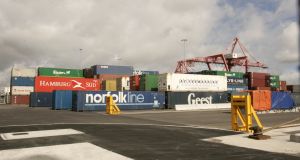 Ships in Dublin Port being loaded with goods for export. Photographer: Dara MacDonaill

A new study into the effects of Brexit on UK and EU trade, particularly agricultural trade, warns that Ireland’s GDP could be harder hit than the UK.

Its main scenario analysis, based on a hard Brexit, foresees a fall in Irish GDP of 3.4 per cent, compared to a fall of 2.4 per cent in the UK. This is broadly in line with the predictions of other recent studies.

The report predicts that Irish agricultural exports to the rest of the world could fall by more than two thirds (71 per cent, or $6.5 billion).

The Brexit effect on the GDP of the whole of the EU27 would be of the order of only minus 0.3 per cent. The report, “EU-UK agricultural trade: State of play and possible impacts of Brexit”, was written by economists for the European Parliament’s agriculture committee.

The report even suggests the fall in Irish GDP could be as high as 9.4 per cent in the most malign scenario studied, if “non-tariff mechanisms” combine with new World Trade Organisation (WTO) tariffs to hamper Irish agricultural exports gain access to the rest of the EU and world.

Much of that particular effect is attributed by the report’s authors to the large share of Irish exports which rely on UK “intermediaries” such as animal feedstuffs or fertilisers, but which some economists suggest would simply be sourced elsewhere. Even in the context of a hard Brexit that scenario is seen as unlikely.

Overall agri-food products are less traded than manufactured ones, and contribute less in total to GDP. They will, however, face the largest increases in trade protection, both in terms of tariffs and non-tariff measures.

Agri-food exports of the EU27 to the UK are predicted by the report to decrease by $34 billion (62 per cent) and imports by $19 billion (with the same relative decrease, 62 per cent).