Theresa May held captive by Tory press and her 'headbangers'

Chris Johns: The chances of no deal on Brexit keep rising with the passage of time 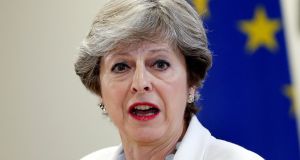 Theresa May: One of the more astonishing aspects of the Brexit process is the persistence with which the UK government keeps negotiating with itself rather than Brussels. Photograph: Reuters/Francois Lenoir

According to the tabloids and the headbanger wing of the Tory party, to voice doubt about the wisdom of Brexit is akin to treason. Judges and anyone else who point out that there is a long and growing list of problems are denounced as “enemies of the people”.

Anyone who muses about the possibility of a second referendum is treated as if he or she is suggesting regicide: if Brexiteers had their way a journey through the Tower of London’s Traitor’s Gate would be the appropriate punishment.

Brexit has two enemies beside the (growing) number of people who don’t want it to happen. The billionaire owners of British newspapers are going to have to find ways to stop the passage of time and reverse the rules of logic.

The EU is a Customs Union which requires, with no ambiguity or subtlety, an external border. When the UK leaves it requires a border with the EU. That means a Border between the Ireland and the UK.

As Pascal Lamy, the former EU commissioner and secretary general of the World Trade Organisation (WTO ) said this week, the only question is where you put it: either on this island or somewhere in the Irish Sea. The latter option appears to be ruled out by our friends in the North, so logic implies a land Border. There will be trade frictions and security implications; the only debate is over their nature and size.

Current talk is of a “transition period”; a predetermined length of time that enables all of the necessary negotiations to take place and systems designed to put into effect all those new customs arrangements. These will be the first trade negotiations in world history designed to raise rather than lower trade barriers.

Britain probably leaves the EU in name only in 2019 and then transitions to Brexit-proper a number of years into the future. The logical problem with transition is that it usually requires some idea of what you are transitioning to.

Both sides of this debate can see transition for what it is – Brexit delayed. Business in particular has realised that what this means is that the cliff edge is merely postponed.

The British government is incapable of describing in any way what Brexit will actually look like. The only safe business strategy is to hope for the best but plan for the worst.

One of the more astonishing aspects of the Brexit process is the persistence with which the UK government keeps negotiating with itself rather than Brussels. There is now widespread agreement that ideologues are now holding the country to ransom. Prominent commentator Robert Peston thinks the UK is displaying all the hallmarks of a country experiencing a collective nervous breakdown.

Moving people and activities out of the UK is now a bit like all of those disaster recovery plans that most businesses have in place in case the office or factory burns down. An alternative place of business is prepared and paid for as a kind of insurance policy.

Business planning for Brexit can be seen in this light: disaster recovery. But it’s not like having a back-up office in Sandyford for your main business in the IFSC. Most normal disaster recovery policies assume that the move to new accommodation will be temporary. Brexit is about how you move out of the UK into the EU permanently.

And it is a much bigger deal: traditional disaster recovery plans do not involve buying up school places in foreign countries.

EU president Donald Tusk recently laid out the logic: Britain can have a good deal, no deal or not do Brexit. But the other enemy of the process is now coming into play: time.

Theresa May continues to dither over which of these three choices she wants to make. Of course it’s worse than this because, held hostage by her headbangers and the Daily Mail, she maintains that her only choice is deal or no-deal. It really is a game show. As time runs out, plans for no deal have to be made: again it is a matter of logic. Even the EU itself has now quietly begun disaster recovery preparations.

Ivan Rogers, formerly Britain’s top official in Brussels, this week told a select committee of the UK parliament that the key moment when May lost her negotiating power was when she triggered article 50. In his words Britain is now “screwed” in the negotiations with zero leverage. All of the power rests with the EU27. In other words, the only people who can define what a “good deal” looks like are all in Brussels.

Logic and the passage of time means that the only way a transition can now be agreed is if May accepts what the EU will, sooner or later, offer her. How she sells that deal to the Brexiteers is tough – possibly even impossible – to imagine.

The chances of no deal, logically, keep rising with the passage of time.