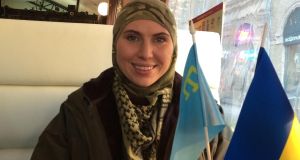 Volunteer fighter Amina Okuyeva, pictured in Kiev in 2014, who was killed in an ambush on Monday night. Less than five months ago she was credited with saving her husband’s life, when she shot a suspected Chechen hit man. Photograph: Daniel McLaughlin

Ukrainian officials believe Russia was behind an ambush near Kiev that killed prominent volunteer fighter Amina Okuyeva and injured her Chechen husband, Adam Osmayev, who was once accused of plotting to murder Russian president Vladimir Putin.

Monday night’s gun attack on the couple’s car came less than five months after Ms Okuyeva was credited with saving her husband’s life, when she shot a suspected Chechen hit man who allegedly opened fire on Mr Osmayev while posing as a French journalist.

The murder also took place just five days after a bomb blast outside a television station in Kiev killed two men and injured nationalist deputy Ihor Mosiychuk, for whom Ms Okuyeva (34) at one time worked as an aide.

Ukraine’s embattled authorities are under mounting pressure to respond to a string of contract killings that have claimed the lives of a top journalist, an exiled Russian politician and several influential members of the Ukrainian security services.

Ukrainian officials said the couple’s car came under fire from gunmen hidden in roadside bushes at a train crossing about 30km from the centre of the capital.

“I understood [what was happening]. Everything was flying around me, the panels and everything,” Mr Osmayev told local media in hospital after the attack.

“I drove on as far as I could but the engine had been hit too and the car stopped. I tried to give [Amina] first aid, but she had been shot in the head.”

Ms Okuyeva served as a doctor and fighter in the Ukrainian volunteer forces that were formed after Russia annexed Crimea and fomented a separatist uprising in eastern Ukraine in spring 2014, following a pro-western revolution in the country.

She was born in the Ukrainian Black Sea port of Odessa, where Mr Osmayev – the son of a Chechen former oil executive who sent him to study in England – was one of several men arrested in 2012 on suspicion of planning to blow up Mr Putin.

Five years earlier in Moscow, he had been accused of plotting to assassinate Ramzan Kadyrov, the notoriously brutal Kremlin-backed ruler of Chechnya.

After Ukraine’s revolution caused a deep rift with Russia, Mr Osmayev was released from custody and immediately joined a volunteer battalion in the eastern Donbas region, and took command soon after when its leader was killed in battle.

“For every Ukrainian patriot she became a dear sister. And the enemy should answer for the murder of our sister,” said Oleksandr Turchynov, secretary of Ukraine’s national security and defence council.

“Russia, continuing its aggression against Ukraine, has unleashed terror deep in the rear [of the battlefield], destroying brave defenders of our country,” he added.

Anton Gerashchenko, an adviser to Ukraine’s interior minister, said the murder could have been carried out by the Russian security services “to destabilise the social-political situation and create an atmosphere of terror and fear in Ukraine” or people in Chechnya for whom it was “revenge on Adam, who went against Ramzan Kadyrov and his circle”.

Russia has denied similar accusations from Kiev after other high-profile murders.