Europe Letter: A way of life has come to a halt with deep implications for the Irish State 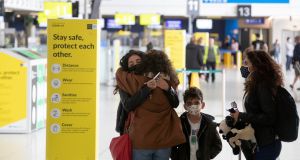 Passengers at the departure gates at terminal 1 in Dublin airport on Thursday. Photograph: Colin Keegan/Collins

The public debate in Ireland since the pandemic struck has revealed a prevalent assumption that travelling outside the island means going on holiday.

Apart from being age and class-specific, this belief is deeply off-kilter for a nation with one of the highest proportions of its citizens living abroad in the world. One in six, according to a 2016 assessment, the highest level in the OECD.

The equation of overseas travel with holidays, evident in statements by both government and opposition politicians, involves two key flawed assumptions.

One is an idea that overseas summer holidays are a universal norm, rather than a luxury enjoyed by some. (The adoption of the term “staycation” to mean a holiday in Ireland, rather than the previously more common meaning of a holiday in your own house, is another illustration. Isn’t the quintessential summer holiday in Wexford? For whom is this a downgrade from a “real” holiday?)

The other assumption involves a peculiar blindness to the reality that Irish families and work practices are international.

“It’s bizarre . . . There can hardly be a household in the country without someone who can’t get home,” was how the disconnect was described to me by Dr Marc Scully, a lecturer in the psychology department at Mary Immaculate College Limerick who studies migration and the Irish diaspora.

Coverage in the Irish media is also culpable for the flawed framing of the issue. As one of the Irish stranded abroad, it was jarring and disconcerting to read news about the government’s travel advice framed as a consumer story, and illustrated with photographs of beaches and headlines lamenting the loss of holidays this summer.

The equation of travel with holidays was repeated throughout the furore over the Department of Social Protection’s cancellation of benefit payments to people who were found to be travelling through ports or airports.

“If a person chooses to ignore public health advice and go on holidays, they are not just unavailable for work for the duration of their holiday, they are also unavailable for the two-week quarantine period on their return,” Minister for Social Protection Heather Humphreys said in defence of the practice.

This illustrates an assumption that if people are in an airport, they are there for leisure reasons.

I’m a 2009 graduate. Airports don’t mean holidays to me. They mean work, and how I see my family.

Dr Scully himself lived in Ireland while working in Britain for six months, taking a plane full of weary commuters each week on the red eye from Cork airport.

“If this had happened three years ago, I would have been faced with the decision of: do I resign my job, or do I face not seeing my wife and son for six months? I can only imagine there are people who have had to make that decision,” Dr Scully said.

“Or people who are caring for family members, who have suddenly had to make the decision of: do I quit my job, or do I suddenly try to sort out the caring responsibilities elsewhere?”

“There’s a way of life there that has suddenly stopped,” he observed.

Here are some reasons why people can be in an airport. On their way to collect someone from hospital. Going to a job interview. Seeing a solicitor about a will. On the way to hospital themselves.

Listen to the stories of those who were stopped in Dublin airport by the welfare officers and this is the reality that is reflected.

Roman Shortall was stopped before boarding a flight to Romania with his family. Shortall’s wife, now a naturalised Irish citizen, is originally from Romania, and they were going to see a terminally ill relative. Their child benefit payments were stopped.

Ciaran Cooney is a guitarist and singer with the Irish Celtic show who is resident in Ireland but earns 70 per cent of his income working abroad. His pandemic unemployment payment was stopped after he was checked boarding a flight to Glasgow to spend nine days with his partner, who he had not seen for 15 weeks. He had no income for six weeks and had to move back in with his parents.

“There is no consideration for people who are in relationships with people who live outside the state or those of us who work abroad for a living but were fully tax compliant in Ireland all the time,” he wrote of the incident.

To be absolutely clear: this is not a challenge to the government’s advice on travel. It’s an appeal to ground the debate in the reality of what travel means to the Irish population as a whole, and not the subsection that is primarily concerned about overseas holidays.

Prior to the pandemic, Dublin to London was one of the busiest air routes in the world. That’s down to work and family ties, not tourism. This mobility is fundamental to how Ireland has operated as a nation since at least the last recession. Let’s axe the assumption that your two-week holiday in Portugal is the overriding issue at stake.