US president Donald Trump discusses medical expert Anthony Fauci's high approval ratings and joked that "nobody likes me" as he struggles to improve his standing with voters. Video: Reuters 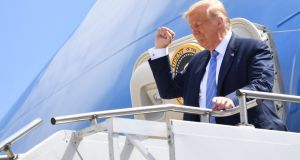 US president Donald Trump gestures as he walks off Air Force One on Wednesday upon arrival at Midland Airport in Midland, Texas. Photograph: Nicholas Kamm/AFP via Getty Images

US deaths from coronavirus passed 150,000 on Wednesday with death rates rising in almost half of American states as the country continues to battle rising infection rates.

The new milestone was reached as president Donald Trump claimed that large parts of the country were “corona free”, asserting that the US was doing better than any other country in the world on testing.

Mr Trump, who last week sought to reset his tone on the pandemic by advising people to wear masks, surprised medical experts by again doubling down on his suggestion that hydroxychloroquine is a treatment for Covid-19. Speaking in the White House on Tuesday, he said that “many doctors think it’s extremely successful”.

“I happen to believe in it. I have taken it. I happen to think it works in the early stages. I think that frontline medical people believe that too,” he said.

Mr Trump, who revealed in May that he was taking a 14-day course of the treatment, said he believed in the drug “based on a lot of reading and a lot of knowledge about it”. He claimed it was “politically” unpopular, but said “I don’t think you lose something by doing it”.

Mr Trump’s comments put him at odds with the Food and Drug Administration (FDA), which has warned of serious heart problems in patients with Covid-19 being treated with hydroxychloroquine.

Official advice from the regulatory body warns that it has not been shown to be “safe and effective for treating or preventing Covid-19”. Though it is used in treating other illnesses, including lupus, it has not been approved to treat Covid-19.

Mr Trump also reiterated his admiration for Stella Immanuel, a doctor who featured in a viral video that was tweeted by Donald Trump jnr this week but was removed by Twitter for promoting disinformation about Covid-19.

Ms Immanuel, one of several doctors featured in the 45-minute video, has previously claimed that DNA from aliens has been used as medical treatments.

Asked about his views on Ms Immanuel after he retweeted his son’s post, Mr Trump said: “I was very impressed with her and other doctors who stood with her. I think she made sense, but I know nothing about her – I just saw her making a statement with very respected doctors. She was not alone.”

Mr Trump also discussed his relationship with infectious disease expert Dr Anthony Fauci, asking rhetorically why he did not enjoy the same approval ratings as the country’s top immunologist.

“He has a high approval rating . . . so why don’t I have a high approval rating?” he said during the White House briefing. Noting that both Dr Fauci and coronavirus task force leader Deborah Birx “works with us”, he added: “Yet they’re highly thought of but nobody likes me. It can only be my personality.”

Mr Trump’s comments came as a Republican member of Congress who had opposed wearing a mask tested positive for coronavirus. Louie Gohmert, a Texas Republican attended several committee hearings this week on Capitol Hill, raising fears he could have infected other Congress members or staff aides.