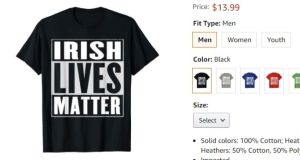 A senior group of Irish-American political and cultural leaders has urged Irish-Americans to boycott the sale of “Irish Lives Matter” T-shirts in the United States.

Walmart and Amazon are selling a selection of T-shirts, some in green, emblazoned with the slogan – a rewording of the phrase Black Lives Matter that has become a rallying cry for racial justice in the United States following the death of African-American man George Floyd at the hands of white police officers in May.

In the letter sent to Representative Karen Bass, the head of the Congressional Black Caucus on Capitol Hill, following the death of civil rights icon John Lewis, more than 60 signatories denounce the “wrongheaded, commercial decision by Amazon, Walmart and other retailers to sell “Irish Lives Matters” tee shirts.”

“While some may try to excuse such tee shirts as merely an exhibition of ethnic pride, we believe at best that they are tone deaf and insensitive, and at worst a deliberate, cynical attempt to trivialize, diminish or denigrate the BLM. We urge Irish Americans to boycott these sales,” the letter states.

The Irish-American association, the Ancient Order of Hibernians, has also called out Amazon on stocking the products, accusing the company of insulting “two heritages for one low price”.

Over 60 Irish-American leaders - many of whom accompanied the late #JohnLewis on civil rights trip to Ireland - have written to Rep #karenbass outlining support for racial justice. Also urge boycott of “Irish Lives Matter” t-shirts for sale on Amazon, Walmart #BlackLivesMatter pic.twitter.com/AIJBl5oRdY

“The hypocrisy of Mr. Bezos’ publicly virtue signaling on Amazon’s policy of respect and diversity while continually peddling prejudice for profit is cynically hypocritical,” the organisation said, referring to Amazon owner Jeff Bezos.

Among the signatories of the letter sent to mark the passing of former congressman John Lewis are current members of Congress Joe Kennedy III, Richard Neal and Brendan Boyle, as well as former ambassadors, academic leaders and cultural figures including novelist Colm Tóibín.

Outlining the links between the American civil rights movement of the 1960s and the formation of the Northern Ireland Civil Rights Association in 1967, the letter outlines how senior figures in the peace process including John Hume drew inspiration from figures such as Martin Luther King jnr.

The letter also recalls the 2014 visit of John Lewis to the island of Ireland, when he led a march over the peace bridge in Derry and delivered the Frederick Douglass address at Iveagh House in Dublin.

“John Lewis is well remembered by our Irish American community for his staunch support for the civil rights movement in Northern Ireland in the 1960s and all through the Troubles.”

The letter notes that Irish America “still has much to learn about the depths of discrimination faced by our African American brothers and sisters. And we have our own history of racial prejudice that we must examine and acknowledge.”

The letter comes amid new initiatives at higher-education institutions in the United States including Glucksman Ireland House and the Irish consulate in New York to highlight the Irish heritage of many African-Americans.

Though precise figures are difficult to establish, it is estimated that up to 38 per cent of African-Americans have Irish ancestry.