May chooses to focus on changes to the backstop 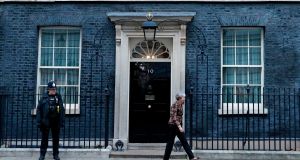 British prime minister Theresa May outside 10 Downing Street. She has rejected calls to rule out a no-deal Brexit or to soften her negotiating red lines in order to unlock a cross-party majority for a softer Brexit. Photograph: Getty Images

Theresa May’s decision to seek a majority for a Brexit deal at Westminster based on Conservative and DUP votes has set her on course for almost certain disappointment.

The DUP and hardcore Brexiteers on Monday restated their demand that the prime minister should seek legally-binding changes to the withdrawal agreement to satisfy their concerns over the Northern Ireland backstop. Less than a week ago May told MPs that such changes were out of the question, adding that any withdrawal agreement would include a backstop. “No backstop simply means no deal, now and for the foreseeable future,” she said.

On Monday, she edged away from that position, encouraging her Brexiteer backbenchers to believe that she could secure such changes or even replace the backstop with an alternative.

Downing Street dismissed reports that the prime minister was seeking a bilateral deal with Dublin to replace the backstop. And she reaffirmed her commitment to the Belfast Agreement following a report that she wanted to amend it to include a shared pledge to avoid a hard border.

In choosing to focus on changes to the backstop, May has rejected calls to rule out a no-deal Brexit or to soften her negotiating red lines in order to unlock a cross-party majority for a softer Brexit.

Embracing a permanent customs union and regulatory alignment with the single market would reduce the impact of the backstop or render it unnecessary. But it would also split the Conservative Party and wreck the confidence and supply agreement with the DUP.

While the prime minister is pursuing her course, however, cross-party groups of MPs are pursuing others through amendments that could see backbenchers take control of the parliamentary timetable and the Brexit process.

This could see a no-deal Brexit being ruled out, with the government obliged to seek an extension of the article 50 deadline if it fails to win a majority for a deal by late February.

Faced with the threat of Brexit being delayed or even overturned through a second referendum, some Brexiteers are likely to back the prime minister’s deal, even without the changes to the backstop they are seeking.

As the March 29th deadline approaches, the EU may be willing to consider making concessions, and the Polish foreign minister’s proposal for a five-year time limit could be a straw in the wind.

Despite Monday’s swift rejection of the proposal, some senior figures in Brussels are open to the idea of a much longer time limit to the backstop, perhaps for 15 or 20 years. A 10 or 12-year time limit could yet provide a ladder for Brexiteers to climb down.