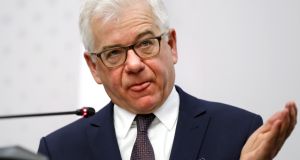 Ireland and Germany have dismissed a proposal from Poland’s foreign minister to break the Brexit deadlock with a five-year limit on the Irish backstop.

The proposal by Jacek Czaputowicz marked the first time an EU minister has broken rank on the issue, but senior Polish sources told The Irish Times the minister was not speaking for the government in Warsaw.

The Polish foreign minister told the Rzeczpospolita newspaper that Ireland could solve the backstop dilemma by asking the EU to amend the UK withdrawal agreement so that the backstop would apply temporarily.

“Let’s say five years – the matter would be solved,” he said. “It would obviously be less favourable for Ireland than an indefinite backstop, but much more advantageous than no-deal Brexit.”

Mr Czaputowicz said London and Dublin were “playing chicken” over the Border and risked a “head-on collision” in which Ireland stood to “lose the most”.

Tánaiste Simon Coveney knocked back his Polish counterpart’s proposal swiftly, saying: “Putting a time limit on an insurance mechanism – which is what the backstop is – effectively means it is not a backstop at all.”

“He has already said what he thinks of it, which is nothing,” said Mr Maas.

Mr Coveney rejected the idea at the time and did so again on Monday. It is understood Mr Czaputowicz repeated the call in a face-to-face encounter with the Tánaiste on the margins of a foreign affairs ministers meeting in Brussels, and suggested both a five-year and 10-year limit on the backstop.

The Polish minister, in his job a year, has an academic background, and teaching colleagues described him on Monday as “an academic, making an academic argument”.

Warsaw political observers say he is an outsider in Poland’s ruling Law and Justice (PiS) with no political base and little connection to Jaroslaw Kaczynski, the leader of the party – and effectively the country.

“I doubt if Kaczynski knows about this – or cares,” said Eugeniusz Smolar of the Centre for International Relations.

“Czaputowicz has no influence in PiS and he merely put on the table a problem that is there but which is not up to Poland to solve.”

Nevertheless, the Polish minister’s remarks strained nerves already stretched in Dublin as British prime Theresa May presented her Brexit Plan B in London.

Mrs May sought to reassure MPs that they would be given “a proper say and fuller involvement” in establishing the UK’s position in negotiations on future relations with the EU.

The government would consult the Commons on its negotiating mandate and regularly update the House during talks, she promised.

And she said the government would offer private and confidential briefings to backbench select committees to ensure MPs are kept up-to-date on the progress of talks without undermining the UK’s position.

“Sympathy, patience and readiness to wait until the UK’s position will be clarified are of utmost important to avoid the worst,” said Mr Altmaier.