Brexit Proof: Uncertainty looms as See.Sense has used scientists and funds from Europe 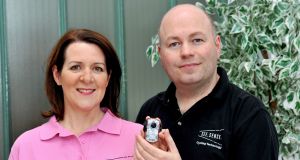 Irene and Philip McAleese: Based in Newtownards, Co Down, they founded See.Sense in 2013.

See.Sense is a cycling and data company that focuses on making smart bicycle lights and connected technology for cyclists. Based in Newtownards, Co Down, the company was founded by Irene and Philip McAleese in 2013. They employ 16 staff and design bicycle lights that are manufactured in one of two factories in Northern Ireland.

See.Sense is partnered with British Cycling as their bike light and crowdsourced data provider. It exports to 70 countries around the world – including Irene’s home country of Australia.

My first thought was that there was a lack of understanding of the issues unique to Northern Ireland. The rest of Britain weren’t thinking about our land border when they were voting.

It’s frustrating that, in Northern Ireland, we don’t have a voice because Stormont is inactive. The majority here voted to remain but that voice isn’t heard.

Free movement of people is really important for us. We have hired data scientists from Europe before and we need to have niche, highly specialised skillsets. We’ve also received EU funding. It’s unclear at the moment how those opportunities will be replaced post-Brexit.

We import a lot of raw materials for the manufacture of the lights. We use Cree LEDs from the US and we’d be impacted in terms of our buying power depending on the value of the pound.

We want to increase our market share in the UK and Ireland because they’re our two biggest markets. Beyond that, probably about 10 per cent is coming from the US.

We’re very happy with the factory that makes our products. Northern Ireland is a low-cost region. It might not be as cheap as China but there are other benefits when you take into account that Nitronica in Co Down is less than an hour down the road and we have more input on the quality.

It would make sense to stockpile, but that would be something for the factory that manufactures our products to think about. We would experience a flow-on effect if we weren’t able to access the product at the price at which it was made previously.

Any sort of reassurance at the moment is just a platitude until something tangible is agreed.

I think many people didn’t understand the impact of what Brexit would mean when they were voting in the last referendum. Now there’s a potential deal, it would make sense for people to express a more informed view.

We’re flexible and we’ve always designed everything to have a global outlook. We don’t want to see our options limited in our own European markets. Whether the UK can replace that with other deals, I’m not sure. Ultimately, we’ll adapt.

We would prefer a soft Brexit. The broader issue around Northern Ireland is wondering what kind of environment this is going to be in a worst-case scenario with a hard border. We have to have a stable society, with good transport and great education.

Invest NI is trying to get more of our type of company because they know the value to the economy. The bigger picture beyond Brexit is how businesses here thrive and scale by creating a positive environment.

When do you expect to be Brexit-ready and have you put any plans in place so far?

I think it’s hard to know how to prepare. We look at our sourcing and suppliers and try and think and plan around that.

Talent is a big issue because we don’t want to close ourselves down. There will be a big issue around EU funding and whether that has been properly replaced.

We don’t want to limit ourselves to just the UK. We’ve been fortunate to go to EU-wide projects like Horizon 2020. It would be a shame to lose that.