US denounces Russia-Germany gas pipeline that could freeze out Ukraine 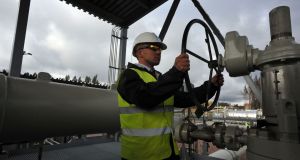 Nord Stream pipeline operator back in 2012: Nord Stream 2, a pipeline under the Baltic Sea, will double the gas Russia can deliver directly to Germany. Photograph: Olga Maltseva

Senior officials from the EU, Moscow and Kiev held talks on Monday over Ukraine’s future as a transit state for Russian gas, as the Kremlin’s role as a key energy supplier fuels friction between European capitals and Washington.

Russia is now building Nord Stream 2, a pipeline under the Baltic Sea that will double the volume of gas that it can deliver directly to major client Germany while bypassing Ukraine and EU states such as Poland and Slovakia.

It is due for completion by the end of 2019 – when Ukraine’s current gas contract with Russia expires – and could deprive Kiev of billions of euro in transit fees and allow Moscow to cut fuel supplies to central and eastern Europe, as it has done in previous years during political disputes.

Ukraine and several EU states have denounced Nord Stream 2 and the European Parliament last month called for the pipeline to be halted “as it is a political project that poses a threat to European energy security”. Russia accounts for about 40 per cent of EU natural gas imports.

European critics of the €9.5 billion scheme have found an ally in the United States, which wants Germany to scrap the plan and threatens to sanction European firms that are partners in the pipeline or help build it.

US president Donald Trump observed with incredulity last year that while the West was imposing economic sanctions on Russia for its aggression in Ukraine, Germany was backing an energy deal that would make it “captive” to Moscow.

Kremlin-controlled Gazprom is leading the project, in partnership with German, Anglo-Dutch, French and Austrian companies, and Swiss and Italian firms are helping lay the pipeline.

The US envoy to Berlin, Richard Grenell, warned German businesses this month that they could face sanctions if they took part in Nord Stream 2.

After talks in Moscow last Friday, German foreign minister Heiko Maas said “questions of European energy policy must be decided in Europe, not in the US . . . To impose unilateral sanctions against Nord Stream 2 is certainly not the way to go.”

Moscow and some German politicians accuse Washington of using the issue to secure more of the European energy market for US firms, but their liquefied natural gas supplies to Europe remain more expensive than deliveries from Russia.

German chancellor Angela Merkel insists Nord Stream 2 is an economic, not political, venture, but during talks with Russian president Vladimir Putin last year she said: “Ukraine should retain its role as a transit nation after Nord Stream 2 is completed . . . This is a matter of strategic significance.”

Mr Putin said last week there were still “possibilities” for Ukraine to act as a transit country in future, alongside Nord Stream 2 and the Turk Stream pipeline now being built to deliver Russian gas to Turkey, the Balkans and central Europe.