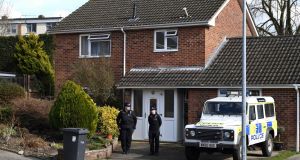 The European Union sanctioned on Monday the heads of Russia’s military intelligence and two of their officers blamed for poisoning a former Russian double agent in England last year.

The EU placed travel bans on four Russians and froze their assets. The two men accused of attempting to murder Sergei Skripal and his daughter Yulia in Salisbury last March and their superiors, the head and deputy head of the GRU, Russia’s military intelligence unit were sanctioned.

The two suspects – known by their aliases Alexander Petrov and Ruslan Boshirov – were caught on CCTV in Salisbury the day before the attack.

The men have denied any involvement in the spraying of a chemical weapon on Mr Skripal’s front door in March.

“These designations include the two GRU officials, and the head and deputy head of the GRU responsible for possession, transport and use in Salisbury of a toxic nerve agent on the weekend of March 4th, 2018,” the EU said in a statement after foreign ministers approved the move.

Britain’s foreign secretary Jeremy Hunt said the sanctions “deliver on our vow to take tough action against the reckless and irresponsible activities of the Russian military intelligence organisation, the GRU, which put innocent British citizens in serious danger in Salisbury last year”.

“They are suspected groundlessly,” he told reporters on a conference call. “We have still not heard any evidence.”

Mr Skripal (66), a former colonel in Russia’s military intelligence who betrayed dozens of agents to Britain, and his daughter Yulia were found unconscious on a bench in the city of Salisbury on March 4th last year.

The two men accused of being agents say they were innocent tourists visiting Salisbury cathedral. Britain published CCTV images of them last year.

The Russians targeted are the first names to be added to a new EU mechanism to punish chemical weapons attacks using banned munitions, regardless of nationality. – Agencies