Sligo on Brexit: ‘Now it feels more like a game of Russian roulette’ 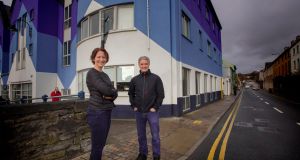 Having opened a new Ford car dealership in Castlebaldwin, Co Sligo, in August, brothers David and Ray Porter are acutely aware of how the Brexit-inspired slump in the value of sterling is affecting the Irish motor trade.

When they were setting up the business, the brothers approached a number of dealers in Northern Ireland and told them they would be in the market for a supply of cars if they got a good price.

“They said: ‘Why would we price them well for you when we have busloads of people coming up every weekend to look at cars?’ ” says David, an accountant by profession. The trip across the Border to window-shop for cars, once sterling started to slide, had become a regular outing for many in the Republic, he believes.

“It was a day out where you’d go to the North, do some shopping, get some alcohol, buy a car,” he says.

In Co Sligo there were more imports registered last year than new sales – 1,355 compared with 1,085.

As far as the Porters are concerned, the biggest impact of Brexit so far is that people are hesitating to opt for a new car, mainly because the trade-in value of their old car is being affected by the huge volume of imports. “I can’t, for example, value a trade-in at €10,000 if someone beside me can import and sell something similar from the UK for €8,000,” says David.

Another reason why the motor industry is so vulnerable to Brexit , he points out, is that there are so few countries in the EU where motorists drive on the left. “We clearly cannot replace imports from the UK with imports from France.”

He doesn’t believe the Government can do much more than it has been doing in the build-up to Brexit. “I think the Irish Government is in a difficult position, to be honest. I think absolutely there should be a backstop agreement by now. It is the middle of January and this is happening at the end of March, so a backstop agreement should exist.”

The accountant’s gut feeling is that there will not be a “crash-out”in March as the stakes are too high for everyone.“In 2016 I was not that concerned as I thought the issue so big there would have to be a resolution. But now, as it comes closer to March, it feels more like a game of Russian roulette.”

In the Building Block co-working hub in Sligo town, many in the tech sector seem unsure what Brexit will mean. Conflict resolution is Sabine Walsh’s speciality and she reckons it’s a skill that is sorely lacking in politics across the water. She work for London-based company Mediator Academy, which provides online courses in conflict resolution to clients around the world.

“The uncertainty is the worst aspect,” says the qualified solicitor.“I don’t criticise the Irish Government. I don’t think there is much they can do because they don’t know what they are planning for. But the adversarial nature of the politics we see in Britain is what gets me.”

Her personal background makes her worry about the future. “I am half German, and my entire childhood was about how the whole point of the EU was that the Holocaust would never happen again.”

She believes a hard border would be “catastrophic” and would “play into hands of populists and nationalists”.

As someone married to a sheep farmer, she also knows how concerned that sector is. “We have no idea what the implications are. I don’t think people realise the level of trade between Ireland and the UK on a day-to-day basis.”

While a new regulatory framework will affect her work in London, she is even more worried about the implications for “peace and prosperity”.

“People had started to take peace, security and prosperity for granted and have forgotten that 80 years ago the English and the Germans were killing each other,” she says.

“And we take a lot for granted in terms of travel. I am sure a lot of people who voted for Brexit will still want to have their beach holidays in Spain.”

She believes the Government must continue to push for a backstop. “I do not think people outside the island of Ireland really realise how fragile the peace in the North is and how easily that could erupt again. There is still no functioning assembly in Stormont because the DUP are too busy propping up the UK government.

“I grew up in an era where every time you crossed the Border into Northern Ireland, people were shoving machines guns in our face. It is really not that long ago, and it is not going to take much to divide the community up there again.”

Denise Mulvaney, a native of Grange, Co Sligo, had been working in the tech sector in London for 10 years but handed in her notice on the day the result of the Brexit referendum was announced. Although the exact timing was a coincidence, she had been feeling uneasy in London in the lead-up to the referendum.

“There was a weird atmosphere,” she says. “I love London but it was a very stressful atmosphere because of the uncertainty.”

The day she made the decision to return to Ireland, she was making her usual dash to pick up her child from childcare when there was an announcement that her train was cancelled because of a fatality on the track. Looking back, she believes that as the build-up to Brexit moved up a gear, suicides on the tube line started becoming much more frequent. “There was a few a month on my line alone.”

She also noted an anti-immigrant attitude, even in her own office. “People would tell me I was not a ‘real’ immigrant because I was Irish, but they would say negative things about colleagues,” she says. “I felt the media was getting people to pick on each other. I felt we were all being played like puppets.”

Mulvaney, a UX (user experience) consultant who describes herself as a problem solver for the tech industry, came home in August 2016 and set up her own company, Astara Creative. Since then lots of Irish expats have sought her advice about making the same move.

She understands the interest but is not convinced that Brexit will be quite the horror story many are predicting. “I keep thinking of the millennium bug and all the media hype around that and the dire warnings, but our microwaves and our alarms clocks were still working at a minute past midnight.”

She is not overly confident about the Government’s approach. “I struggle with the Government anyway on issues such as how they treat our civil servants and our nurses. And I do not feel Ireland has a loud enough voice in Europe; I don’t feel they are representing the passion of the Irish people on this.”

Noel Mulkeen, whose company, Uni.cam, produces videos for the education sector in the UK, Ireland and Germany, says some prospective British clients seemed “shell-shocked” following the vote in the House of Commons last week. “Much of their funding is EU-reliant and the uncertainty means their ability to budget and plan is seriously curtailed.”

This obviously has implications for his company. As someone who benefited from the EU in both his personal and professional life, he has other concerns. “I studied in Sweden, met my wife there and my children are back and forth. We are Europeans. Britain pulling out of that culture is a backward step. But I believe that the people who voted for Brexit and for Trump did so because they felt hard done by. People felt neglected.”

He thinks the Government has been right to press for the backstop. “From what I have seen they are doing a good job. My concern would be that they may have not done enough preparatory work for a crash-out. But I still think that is unlikely to happen and that there will be an extension rather than a crash out and it will drag on for six or 12 months.”