One of the three assailants in the London Bridge attack, Khuram Butt , appeared in a 2016 Channel 4 documentary about British Islamic extremists, The Jihadis Next Door. Video: Channel 4 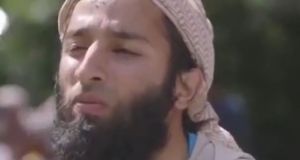 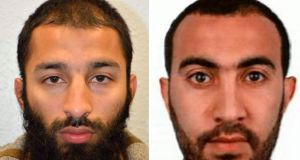 Khuram Shazad Butt (L) and Rachid Redouane from Barking (R), believed by police to be two of the three people responsible for the terror attack in London Bridge. Photograph: AFP/Getty/Metropolitan police

This is what we know about the terrorist Khuram Shazad Butt, who was one of three that carried out the deadly London Bridge attack on Saturday night. Rachid Redouane was named as the second attacker and the third Islamist militant was a Moroccan-Italian called Youssef Zaghba, an Italian intelligence source said on Tuesday.

The 27-year-old British citizen, who was born in Pakistan, was known to the police and MI5 and was the subject of an investigation in 2015.

He is alleged to have been an associate of the hate preacher Anjem Choudary and appeared in a 2016 Channel 4 documentary about British Islamic extremists, The Jihadis Next Door.

The former London Underground worker was once thrown out of a mosque for interrupting an imam’s sermon and verbally attacked an anti-extremism campaigner.

Mohammed Shafiq, chief executive of the Ramadhan Foundation, said Butt called him a “Murtad” — traitor in Arabic — when he confronted Choudary about his support of terrorism days after the murder of Lee Rigby in 2013.

The Jabir Bin Zayid Islamic Centre, where Butt occasionally worshipped, said that “some years ago after interrupting a Friday sermon he was asked to leave the mosque”.

Residents at a block of flats in Barking — where a number of arrests were made on Sunday — said they recognised the attacker and that he had lived in the area for around three years.

He was known locally as “Abs/z” and was identified by neighbours as the terrorist in a photo, which showed him crumpled on the ground after being shot by armed police.

Butt was father to a toddler and baby and a keen gym-goer and weightlifter, neighbours said.

Transport for London confirmed he worked for London Underground as a trainee customer services assistant for six months before leaving in October 2016.

Butt was reported to anti-terror police over fears he was attempting to radicalise schoolchildren, according to reports.

Housewife Erica Gasparri (42), told The Times of London she had reported the suspect to police last year after challenging him in a park near a school.

A friend told the BBC Asian Network he had reported him to the anti-terror hotline after he began expressing increasingly radical views and justifying terror attacks, but the friend said he was never arrested.

One acquaintance, who said the man was a “wonderful guy”, recalled the man playing football in the park with him and his children.

Police said he had appeared on the radar of security services but was in “the lower echelons of our investigative work”.

A neighbour, Ken Chigbo, claimed the attacker, wearing the same Arsenal shirt, had come to ask him about hiring a van hours before the atrocity.

He told Sky News: “He said to me, ‘Oh, where did you get your van, Ken? How much is it, is it possible to get in automatic?’ — all these specific questions about the van, which obviously now makes sense in my head.

“At the time I didn’t think anything of it.”