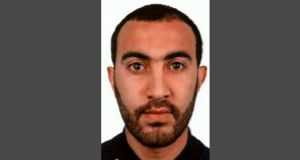 Rachid Redouane was the second of the three jihadi attackers who killed seven people in London on Saturday. Khuram Shazad Butt has also been named as an attacker and the third Islamist militant was a Moroccan-Italian called Youssef Zaghba, an Italian intelligence source said on Tuesday.

Redouane was Moroccan-Libyan pastry chef who had until recently been living in Dublin.

He is thought to have settled in Dublin about five years ago but does not appear to have come to the authorities’ notice before Saturday night’s terror attack.

He is thought to have been identified from a card that was found on his body that had been issued by the Garda National Immigration Bureau in Dublin.

Redouane (30), had also spent time living in a tower block in Dagenham in east London, not far from the home in Barking of his fellow attacker Khuram Butt, and also used the pseudonym Rachid Elkhdar claiming to be six years younger.

Irish security sources confirmed the terrorist married a British woman in Dublin in 2012 and lived in Rathmines, Dublin.

It is not clear when he came to the Republic or how long he stayed but it is believed he used Irish jurisdiction to get a European Union permit, which allowed him to be in the UK.

Redouane left Ireland after the wedding and may have travelled to Morocco before settling in the UK.

He returned to Ireland again in 2015, again for an unknown length of time. He appeared to have spent time in Ireland as recently as three months ago.

Taoiseach Enda Kenny said he was not one of a small number of radicals under surveillance.

An source described the killer as having “extensive immigration history related to the UK”.

Among those arrested in London on Sunday were Charisse O’Leary (38), the mother of Redouane’s 18-month-old daughter. She was reportedly arrested at a temporary accommodation centre near Barking train station, half a mile from Butt’s apartment.

The couple married in Ireland in 2012, but O’Leary never converted to her husband’s faith, and they recently split up, with one woman who knew the couple saying there had been disagreements about the best way to raise their daughter.

In recent posts on social media O’Leary has described herself as single, and in one post she complained that her daughter’s father was not visiting their child.

Garda Commissioner Nóirín O’Sullivan chaired a conference in Dublin on Monday to establish what was known about Redouane.

Meanwhile, a Muslim imam and scholar based in Ireland claimed his warnings to the Irish authorities about Isis and al-Qaida activists based in Dublin had been repeatedly ignored.

Shaykh Dr Umar al-Qadri said no one from either the gardaí or the Republic’s justice department contacted him over his claims about the Islamist extremist presence in the Irish capital.

He said: “Two years ago I spoke at an anti-radicalisation, anti-extremist conference in the EU headquarters in Brussels. I was quite explicit about there being a problem with Ireland, that extremists were using the country as a base to launch attacks elsewhere.”

Despite that public warning and private conversations with individual gardaí, no one either in the force’s senior command or officials from the Irish government contacted him to glean more information, he added.