How Corbyn is tapping into wisdom of the Bernie Sanders campaign

Momentum, the grassroots body backing Labour, has brought in help from the US 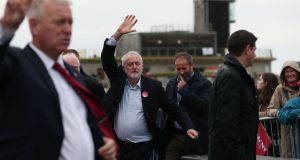 Under a sycamore tree in the corner of a car park in Derby, Jeremy Parkin was surrounded by about 100 people as he gave them a crash course in “persuasion canvassing”. On a white board next to him, underneath Jeremy Corbyn’s name, were the words “Trident, IRA, weak, old”.

Labour’s Chris Williamson lost Derby North to the Conservatives in 2015 by just 41 votes, and it is one of the few seats Labour believes it can win back on Thursday. Momentum, the group set up to support Corbyn two years ago, has sent activists from all over the country to help Williamson, one of the most left-wing Labour candidates standing in the election.

Parkin (27), from San Francisco, is one of a number of veterans from Bernie Sanders’s campaign whom Momentum has brought to Britain to help in the campaign. The Americans brought with them a number of digital tools, including the website My Nearest Marginal, which helps activists determine where they are most useful, a phone-banking app, and peer-to-peer texting.

Parkin says that Labour canvassers were very good at identifying supporters on the doorstep but they don’t know how to go about persuading people who are undecided.

“We’re talking about how to empathise with voters, how to isolate key objections so we can really overcome those and make canvassers only have to focus on one thing, as opposed to talking about the entire manifesto, which can be really overwhelming for people. It’s about focusing on key issues, empathising with voters and coming at it from a place of real authenticity and curiosity and it creates incredible conversations,” he says.

The words on the white board are some of the issues that come up on the doorstep about Corbyn and Parkin says it is important to listen to these objections rather than telling them why they are wrong.

“Validate people’s emotions. People vote based on emotion, not based on facts. So you have to acknowledge that. Isolate their objection just by asking what their biggest concern is, and what you’ve done there is you’ve really reached this person. You’ve shown that you really care about them. It’s not about the party, it’s not about Corbyn, it’s not about your local MP. It’s about you and me, here on your doorstep right now. The immediacy of that moment can create a fantastic opportunity to reach someone, to create an emotional memory which then triggers a voting impulse later on,” he says.

Parkin says the same techniques they used in the Sanders campaign work in Britain, despite differences in the political system and culture. Williamson’s challenge in Derby North is greater than at first sight, however, because Ukip won more than 6,500 votes in 2015, most of which are expected to go to the Conservatives this week.

“I think many of them will come over to Labour. We’ll not get them all obviously, some of them will go over to the Tories, some will stay with Ukip, some won’t vote. And there’s a significant proportion you know who are very attracted by Labour’s programme in terms of bringing back the utilities and the railways into public ownership again. It’s taking back control,” Williamson says.

He admits that some voters in Derby North dislike Corbyn but claims that most of those who say it is a dealbreaker were never planning to vote Labour. And he points out that, while Theresa May’s popularity has nosedived since the start of the campaign, Corbyn’s has improved.

“I think people, when they see Jeremy as they have in the course of this campaign are very attracted not just by his policies but him as a man. He’s a genuine principled man who means what he says and says what he means,” he says.

“For many years, people have been sick to death and have been calling for an alternative to the sort of triangulated policymaking process, leaders who are influenced by focus groups and things like that and are just really saying what they think people want to hear.