Several others injured in incident during emergency landing at Moscow airport

41 people have been killed and several others injured when a Russian passenger plane caught fire while making an emergency landing at a Moscow airport. Video: Reuters/ As credited 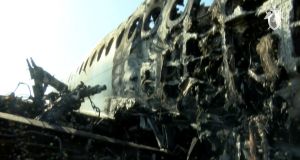 Both flight recorders have been recovered from the plane that caught fire while making an emergency landing in Moscow, killing 41 people, Russian officials said.

Russian Investigative Committee spokeswoman Svetlana Petrenko was quoted by Russian news agencies on Monday as saying investigators are looking into three main possibilities behind the cause of the disaster — insufficient pilot qualifications, equipment failure, and weather.

Those who escaped leapt out of the Sukhoi SSJ100 airliner down inflatable emergency slides and ran across the tarmac.

Storms were passing through the Moscow area when the jet caught fire during the emergency landing, after it turned back for unspecified reasons during an internal flight to Murmansk.

He also told reporters in a briefing on Monday that six people who survived the disaster on Sunday night are being treated in hospital.

Aeroflot Flight 1492 took off from Moscow bound for Murmansk, a port city in northern Russia. But immediately after takeoff, the pilots radioed a distress call, Interfax reported, and the plane, a Sukhoi SSJ-100, circled back for an emergency landing. The cockpit crew stopped responding by radio after reporting the emergency, Interfax reported.

Aeroflot, Russia’s national air carrier said the incident had been caused by a technical fault on board the plane that departed Sheremetyevo on Sunday evening bound for the city of Murmansk in northwest Russia.

Shortly after take off, the pilot radioed a distress signal and turned back, circling above the airport before making an emergency crash landing.

Aeroflot said the evacuation had been completed efficiently within 55 seconds.

However, Russian media cited unnamed sources saying that passengers scrambling to retrieve their hand luggage before exiting the aircraft had slowed the evacuation process. President Vladimir Putin sent his condolences to the families and friends of those who had died and ordered a full investigation into what had caused the fire.

Russia’s health ministry said two people injured in the incident were in a serious condition in a Moscow hospital.

Russian deputies said all Superjet-100’s should be withdrawn from service until the investigation was complete.

Russia’s Sukhoi Civil Aircraft Company said the stricken plane was produced in 2017 and had last undergone maintenance in April this year.

Aeroflot has been the main buyer of Superjet-100’s since the plane – the first passenger aircraft built in Russia since the collapse of the Soviet Union –was first launched in 2011.

A fatal accident occurred during a demonstration flight in 2012 when a Superjet-100 crashed with 50 people on board.– Additional reporting: PA/New York Times