Labour reaffirms policy that identifies second referendum as ‘an option’ 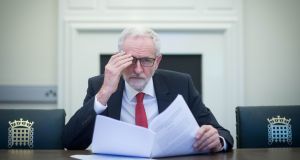 Jeremy Corbyn has fought off an attempt to change Labour’s policy on Brexit by committing the party to a second referendum in all circumstances. The ruling national executive committee (NEC) agreed after a five-hour meeting on Tuesday to retain the current policy that identifies a second referendum as “an option” if Labour cannot force changes to Theresa May’s deal or trigger a general election.

“Labour’s European elections manifesto was agreed at the NEC today and it will be published soon,” a party spokesman said. “The NEC agreed the manifesto which will be fully in line with Labour’s existing policy; to support Labour’s alternative plan, and if we can’t get the necessary changes to the government’s deal, or a general election, to back the option of a public vote.”

Pro-Europeans led by deputy leader Tom Watson wanted the manifesto to commit Labour to putting any Brexit deal approved by MPs to a confirmatory referendum. After the meeting,some pro-European MPs claimed that the decision meant that a vote for Labour could still open the way for a second referendum.

However, Gloria De Piero, a Midlands MP who insists that the outcome of the 2016 referendum must be respected, also welcomed the decision.

“Labour’s manifesto for the European parliament will not contain a pledge to hold a second Brexit referendum.The party’s ruling national executive committee agreed that another nationwide poll should only be “an option” if it cannot force a general election.”

The Scottish National Party (SNP), Change UK and the Liberal Democrats said the NEC’s decision showed that Labour was not committed to a second referendum.

The SNP’s leader at Westminster, Ian Blackford, accused the Labour leader of conspiring with “a Tory-led Brexit shambles”.

“Jeremy Corbyn today had an opportunity to help bring an EU referendum closer, but instead he has chosen to continue his complicity in the Tories’ plan to remove us from the EU.”

Mrs May wants talks with Labour over a common approach to Brexit to conclude by the middle of next week. If the two sides fail to agree a common approach, the government will schedule a series of indicative votes on options for Brexit, probably including a customs union and a second referendum.

Two former Conservative ministers, Greg Hands and Nicky Morgan, said on Tuesday that they would chair a new initiative to develop “alternative arrangements” for the Border to avoid the Northern Ireland backstop. The Alternative Arrangements Commission will seek to develop detailed proposals to avoid physical infrastructure at the Border with “comprehensive customs co-operation arrangements, facilitative arrangements and technologies” as set out in a document agreed between Britain and the EU in Strasbourg in March.

The commission said it had engaged a technical panel of border and customs experts, practitioners and lawyers with detailed knowledge of trade, business and community relationships in Ireland, as well as EU, UK and international trade regulations.

“Nine working groups have been created covering topics including the Border and the movement of people in the context of the Good Friday agreement, tax, sanitary and phytosanitary standards, small traders and trusted trader schemes,” the commission said.