Kathy Sheridan: ‘No-one likes us, we don’t care’ will only take the fake soldiers so far 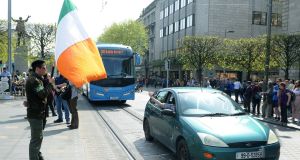 There is no law against a ragbag militia taking over a swathe of the capital’s main thoroughfare and calling it a march. Photograph: Aidan Crawley

Should any visitor decide to test the nation’s tolerance, they might begin a conversation about the fake soldiers parading down O’Connell Street a couple of weeks ago. Even without the murder of Lyra McKee, it would have been an assault on the senses. The two combined made it almost impossible to process at any rational level.

One thing we know: Simon Harris’s declaration that “only one organisation has any right to march in military uniform in our country” is only morally correct. There is no law against a ragbag militia taking over a swathe of the capital’s main thoroughfare and calling it a march.

They run an armed gang. Nothing will dissuade them from using armed violence to achieve their aim. And they have zero support. We know all this because they said so in a Sunday Times interview. They failed to mention that to achieve their aim would entail the overthrow of democracy and the State’s entire system of government. This approach is also known as fascism.

But some of them are still teenagers. Some of them may be unaware that a majority on both sides of the Border voted for peace? They know. Their considered response is that “people didn’t know what they were voting for. . . it’s like Brexit”.

And it’s probably true that some voters ticked the box for peace in 1998 without a thought more radical than a desire for their children to die of old age rather than at the hands of gunmen or random bombs.

Yet 94 per cent of voters in this State agreed to replace the old territorial claim with an expression of a desire to see Ireland united peacefully, by consent and with due recognition that Irish people exist in “all the diversity of their identities and traditions”. Undeniably radical and no room for confusion, entirely unlike Brexit.

But that 94 per cent vote did not come out of the blue. Northern Ireland was never short of peace movements. In 1976, over 20 years before the vote, Mairead Maguire and Betty Williams brought tens of thousands onto the streets after Maguire’s sister’s three small children were run over and killed by Danny Lennon, a dying 23 year old Provisional IRA man.

Lennon, a PIRA member at 18, had been trying to escape in a hijacked car transporting an Armalite rifle when fatally shot by British troops. In a prison letter in Lennon’s defence – “a socialist by instinct, an IRA operator by choice” – Gerry Adams offered his “sincere condolences” to the Maguire and the Lennon families while describing the Maguire children “as victims of circumstances created when [Lennon] was shot dead. He did not point a weapon at them. He did not drive the car at them. He was dead before the car crashed. That much was conceded by the British army . . . He meant no harm to anyone other than the people who eventually killed him; and even then it was the system they represented which he was opposed to”.

The fake soldiers who now style themselves as the IRA have adopted this level of reasoning as their baseline – but crucially without the redemption of the peace process that would eventually come many deaths and decades later.

They can dismiss every view by resorting to that circular argument beloved of hormonal teenagers and Millwall fans back in the day: No-one likes us, we don’t care. “To support armed struggle was never popular,” they say, so they “actually don’t care about being popular”. And of course they don’t care either about “getting people elected or running in elections”. That would require a pretence of respect for democracy and some really hard work. It is also why they can never agree to talks; the absence of substance would be savagely exposed.. “Our view is that [talks] would be selling the product short”, said one. The notion of murdering for a “product” is novel.

The irony is that this gang have much in common with the Brexiteers they affect to despise. They both drone on about “sovereignty”. And just like Brexit, there is no indication of where this “sovereignty” would begin or end. They describe themselves as anti-imperialists and socialists but once they have murdered and bombed their way to the first staging post, how would this grand plan evolve?

Just like the Brexiteers, our new overlords would doubtless view EU membership as an intolerable obstacle to utopian sovereignty. And just like a small percentage of their Brexiteer counterparts, an underlying threat of violence would have to be maintained lest things failed to go precisely their way.

It may take a while. They clearly failed to anticipate the furious, physical backlash from a new generation. Saoradh, the so-called “political wing” of the gang, has been given notice of eviction from its Derry office, where friends of Lyra McKee left their powerfully symbolic bloody handprints last week.

“No-one likes us, we don’t care” will only take a fake soldier so far.