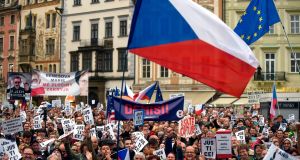 Czech president Milos Zeman has appointed a new justice minister despite street protests over fears that he and scandal-hit premier Andrej Babis could pose a threat to the country’s rule of law.

Thousands of people rallied in Prague and other Czech cities and towns on Monday evening, carrying EU flags and chanting slogans such as “We are not blind,” “Independent justice” and “We want an honest government.”

Regardless of their disapproval, Mr Zeman swore in his long-time ally and adviser Marie Benesova as justice minister on Tuesday, almost two weeks after her predecessor, Jan Knezinek, resigned from the post.

He stepped down just a day after Czech police completed their investigation into Mr Babis and recommended to the public prosecutor that he face trial for alleged fraud, in a case that the premier and Mr Zeman call politically motivated.

Mr Babis is accused of securing €2 million in EU funding in 2007 by misrepresenting the ownership of the company involved, and could face 10 years in jail if found guilty.

The billionaire also faces investigation by the European Commission over possible conflict of interest around his business empire and its access to EU farming subsidies and other funding.

He denies wrongdoing and insists that his Agrofert conglomerate is now in a trust and out of his hands, since he swept to power in elections in 2017 at the head of populist, anti-immigration Ano (“Yes”) party.

Critics suspect Ms Benesova will do the political bidding of Mr Zeman and seek to block or quash proceedings against Mr Babis. She is a former member of the Social Democrats, who now support Mr Babis’s government, and, as a deputy two years ago, she declined to back a motion to lift his immunity from prosecution in the fraud case.

“The situation is serious. Babis is drowning in scandal,” David Ondracka, the head of Transparency International in the Czech Republic, told Radio Prague.

“Also, people around the president . . . are deep in hot water and so Prague Castle [Mr Zeman’s office] has sought to find a justice minister who would prevent their prosecution and who would tame the judiciary.”

The “Million Moments for Democracy” group that organised Monday’s protest said: “We don’t want our prime minister to avoid a fair trial! We don’t want Benesova to be justice minister! If our demands are not answered, we will be forced to protest again. If we are indifferent now, we will pay heavily for it.”

Mr Babis has also railed against a court ruling in his native Slovakia that he should not be removed from a list of former agents of the communist-era secret police; he denies giving any information to Czechoslovakia’s feared StB in the 1980s.

Surveys suggest the popularity of the tycoon and Ano have not been damaged by his legal travails, but the EU will look with concern upon any possible threat to the rule of law in the Czech Republic, as it tries to counter efforts by populist leaders in Hungary, Poland and Romania to extend political influence over their judiciaries.