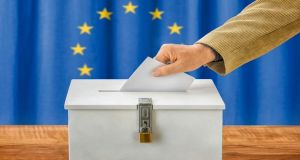 This election could be the most important since the first direct elections to the European Parliament in 1979. File photograph: Getty

The European elections on May 23rd will tell a lot about the state of Irish politics while providing an insight into the electorate’s attitude to the future direction of the European Union. A competitive field has emerged in each of the three constituencies with candidates of all of the mainstream parties competing with prominent Independents of the left and right. Voters will certainly not be able to complain that they don’t have a choice.

This election could be the most important since the first direct elections to the European Parliament in 1979. The fabric of the EU as we have known it is under threat from the rise of populist parties across the continent and they are certain to have a stronger presence in the next Parliament. One of the critical questions is whether this trend will manifest itself in Ireland or whether the solidarity shown by EU institutions and fellow member states during the Brexit negotiations will prompt increased public support for mainstream politics rather than the extremes.

The last general election here in February 2016 followed the trend towards political fragmentation evident across Europe, most recently in the election in Finland the weekend before last. The European elections will show whether the centre ground has strengthened or weakened in the interim.

The last European elections five years ago when just four of the 11 Irish seats were won by candidates affiliated to the big centre-right and centre-left groups which have dominated the EU were an early indication of the fractious political mood that gave us the current hung Dáil.

Candidates from the political fringes in this State have tended to do better in European elections than in general elections. This time around the stakes could not be higher and it will be intriguing to see the impact, if any, of that reality on the campaign and its outcome.

One positive aspect of Brexit is that it has focused public attention on the importance of the EU as never before. This should have an impact on the kind of debate that evolves during the election campaign and on the quality of media coverage.

All candidates should be obliged to say where they stand on the major issues facing the EU as well as more local ones. A lively debate on the future of the continent might persuade voters to focus on the bigger issues rather than the more parochial concerns that have often dominated in the past.

However, one issue that will not be resolved until May 23rd – the deadline for UK participation – is whether Ireland will have 11 or 13 seats when the new Parliament meets on July 2nd. The continuing uncertainty over Brexit is another reason why it is imperative that MEPs of the highest calibre are elected.