Family of Lyra McKee thank public for ‘outpouring of love’ 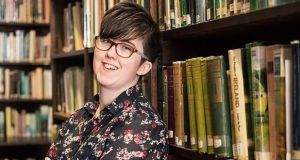 Lyra McKee (29) who was shot dead by the New IRA. Photograph: AFP/Getty Images

The family of Lyra McKee has thanked people for their support since her murder in Derry.

“The outpouring of love, respect and admiration for our dear Lyra, has been of great comfort to us in these dark days. To know that our wee Lyra was so well-loved across the globe and by people of all walks of life, is a true testament to her personal philosophy and her vision for the world,” the family said in a statement.

“We know that as our nightmare continues in the weeks, months and years ahead, that we will not be alone. We know that you will all continue to support us and we know that we will all rejoice together on the day that justice is achieved for our Lyra.”

The family, which had issued a previous statement prior to her funeral last week, said it wanted everyone who “said a prayer; shared a thought; sent a message, card or text; attended a vigil; attended or watched her service; visited her home; travelled; respected our privacy; or did any other positive act in response to Lyra’s murder to know that we appreciate every single sentiment no matter how small; these things have helped to give us some strength while we are at our weakest”.

The New IRA’s murder of the 29-year-old journalist, author and gay-rights activist has led to renewed efforts to reestablish the Northern Executive.

British prime minister Theresa May told her cabinet the London and Dublin governments were engaged in “intensive preparations” with the Northern Ireland parties ahead of the start of a fresh round of talks next week.

Mrs May and Taoiseach Leo Varadkar announced the start of negotiations aimed at restoring the devolved institutions at Stormont in a joint statement last week.

“The PM said that while momentum exists around the need to commence the talks process, we should not underestimate the challenges facing the Northern Ireland parties. Intensive preparations are now taking place between the UK and Irish governments and with the Northern Ireland parties on the structure and substance of the talks,” the prime minister’s official spokesman said after the cabinet meeting.

Northern Ireland secretary Karen Bradley told the meeting that the death of Ms McKee had led to “a renewed rejection of violence” by the people of Northern Ireland.

“The people of Northern Ireland have also expressed their frustration at the current impasse and their desire to see devolved government restored quickly,” the prime minister’s official spokesman said.