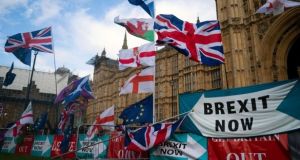 A report found nine out of 10 EU citizens in the UK would prefer a card over digital evidence of their rights. File photograph: Will Olivier/EPA

The British government is facing fresh calls to issue EU citizens with a physical document to prove they have the right to stay in the country after Brexit.

A report found nine out of 10 EU citizens in the UK would prefer a card over the digital evidence they have now to demonstrate their rights in future to employers, banks or landlords.

Fears over discrimination, loss of identity and a continuing lack of trust in the government’s willingness to deliver guaranteed lifetime rights emerged as serious concerns in the research – the biggest survey of EU, European Economic Area (EEA) and Swiss citizens in the UK to date.

Tanja Bueltmann, a professor at Northumbria University who designed and conducted the poll along with the campaign group the3million, said: “The survey documents, without question, we have an ‘unsettling status’.

“The government has a duty to finally give EU/EEA and Swiss citizens certainty. Hollow words are not enough.”

The findings came just days after the government gave the European parliament’s Brexit co-ordinator, Guy Verhofstadt, reassurances that EU citizens would not be automatically deported if they failed to apply for the settled status scheme.

The survey, published on Monday, found that nine in 10 of those polled were unhappy about the lack of a physical document to demonstrate their right to remain in the country after they had been granted settled status or pre-settled status.

As many as 11 per cent said they had already been asked for settled status proof, even though this is not legally required.

This echoes a warning by private landlords that tenants could face discrimination because of the lack of a physical document.

On the plus side, many of those surveyed reported a positive experience of the settled status app, with a majority of respondents saying the application process worked well.

As many as 97.1 per cent of the 3,171 valid responses to the survey said they had received the status decision they expected.

However, the emotional response to having to apply and the consequences of being labelled as someone with “settled status” was largely adverse. The words most frequently used by respondents to describe their feelings were “angry”, “anxious” and “unwanted”.

Even those who had already been granted settled status felt worse off, with 80 per cent either strongly agreeing or agreeing that they felt anxious.

Eight out of 10 said the process made them stressed and many thought citizenship was far more secure.

“While the EU settlement scheme works for many from a process perspective, it [does not] provide a sense of security,” the report said, adding that while it works in essence for the Home Office, it would be better branded the “unsettled scheme”.

Maike Bohn, co-founder of the3million, said the report underlined the lack of trust after three years of mixed messages.

“Are we the much-quoted ‘neighbours, colleagues, friends’ or are we the ‘queue jumpers, benefits scroungers, unwelcome guests, draining the NHS’?

“The government needs to step up local outreach and support, both to EU/EEA and Swiss citizens but also to employers, landlords and others who will be forced to check the immigration status of these citizens in order to avoid huge fines.”

The British Home Office said the scheme was working and a digital solution was better than a physical document. “This digital status future-proofs their rights and is linked to their passport or ID card, replacing physical documents which can get lost, stolen, damaged, tampered with and expire,” it said.–Guardian