Johnson vow to implement Brexit deal by December 2020 in doubt 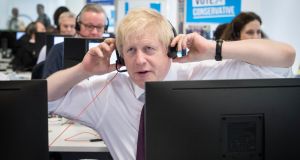 Boris Johnson’s claim that Britain will make a clean break with the European Union in December 2020 has been questioned by UK officials, who fear that a new customs arrangement for Northern Ireland may not be ready in time.

A Department for Exiting the EU (Dexeu) document, extracts of which have been seen by the Financial Times, warns that implementing Mr Johnson’s Brexit deal, which would see Northern Ireland remain part of the EU customs code, presents a “major” challenge.

It also raises the possible “legal and political (domestic and EU) impact of not being able to deliver the protocol in Dec 2020” – a reference to the protocol covering Northern Ireland signed by Mr Johnson with the other 27 EU member states last October to secure an exit deal.

The Dexeu document, circulated last week to senior officials in Whitehall, said: “Delivery of the required infrastructure, associated systems, and staffing to implement the requirements of the protocol by December 2020 represents a major strategic, political and operational challenge.”

It adds that “delivery on the ground would need to commence before we know the outcome of negotiations”, a reference to the wider free-trade agreement that Mr Johnson insists he can agree with the EU in the course of 2020.

The document, marked “Official Sensitive” and titled “Delivering the Protocol by December 2020”, concludes by discussing the possibility that the government would not be ready to put in place new systems and procedures to cover trade with Northern Ireland by the end of next year.

Dexeu said it “did not comment on leaks” but a Conservative spokesman said: “Our new deal with the EU takes the whole of the UK, including Northern Ireland, out of the EU.

“A Conservative majority government will implement this deal and agree a trade agreement next year. In doing so we will strengthen our union and we will not extend the implementation period beyond December 2020.”

Mr Johnson on Sunday continued his denials from last week that the Brexit deal for Northern Ireland, which would see the region stay part of the UK customs area but subject to EU customs rules, would involve checks on goods travelling in either direction across the Irish Sea.

“There’s no question of there being checks on goods going NI/GB or GB/NI,” Mr Johnson said. “We’re part of the same customs territory and it’s very clear that there should be unfettered access between Northern Ireland and the rest of GB,” he told Sky’s Sophy Ridge.

That assertion flew in the face of a leaked, internal treasury report, which detailed new customs procedures required for goods travelling in both directions. Trade from GB to NI would require customs checks as well as safety checks, particularly for food and animal products.

Last week a Conservative statement also appeared to contradict the prime minister’s position. “There will be checks as goods head into Northern Ireland, but the only goods that will pay tariffs will be goods that are destined for the Republic,” it read.

Steve Barclay, Brexit secretary, has previously admitted that goods travelling from west to east across the Irish Sea would also be subject to customs declarations.

Mr Johnson’s insistence that Britain will leave the transition period at the end of December 2020 and begin a new trading relationship with the EU – including leaving Northern Ireland within the EU trading system – has long been questioned by officials.

Sam Lowe, a trade expert at the Centre for European Reform, said: “We are talking about a big bureaucratic exercise here.” He said something similar to the transition period would have to continue while new systems were put in place.

“While it may be possible to have inked a free trade agreement by the end of the year, you would still have to implement it,” he said. “That would require an extension of the status quo, otherwise there would be chaos.” – Copyright The Financial Times Limited 2019