EU urged to recognise Palestine as ‘point of no return’ looms

Amid latest signs of US support for Israel, pressure grows on Brussels to broker talks 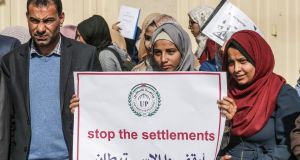 Students and professors of the University of Palestine carry placards at a demonstration against the US policy shift on Israeli settlements. Photograph: Said Khatib/AFP

EU foreign ministers will be asked on Monday to consider formal recognition of the state of Palestine.

Meeting in Brussels the foreign ministers are expected to hold a first discussion of a letter from their Luxembourg colleague, Jean Asselborn, warning that Israeli measures against the Palestinians are jeopardising any ultimate two-state settlement of the conflict, and that the EU should help “to create a more equitable situation for both parties”.

“Each day the point of no return comes dangerously close,” he writes.

Supporters of the Palestinians have been expressing concern that continued Israeli settlement building is creating new “facts on the ground” more likely to make a Palestinian state unviable.

They have warned that the Israeli leadership has increasingly been signalling its willingness to move towards annexation of the Occupied Territories and that the US announcement last month, in a break with international law, that Israeli settlements would no longer be considered illegal and its earlier recognition of Jerusalem as the country’s capital are encouraging Israeli hardliners.

There is no expectation that a long-awaited a US peace initiative will now materialise and growing pressure that the EU should step up its own diplomacy to broker talks.

Currently only nine EU member states recognise the Palestinian state – 138 of the 193 UN member states do so – while most, like Ireland, link recognition to any eventual peace agreement. Tánaiste and Minister for Foreign Affairs Simon Coveney, however, has suggested earlier recognition if negotiations between Palestine and Israel continue to prove fruitless. “We may have to forget the second part of that . . . if this hopelessness continues in terms of the dialogue working we will be forced to review that for obvious reasons, as I think a lot of other countries in Europe will too.”

“Unfortunately we are witnessing the two-state solution being dismantled piece by piece, day after day,” Asselborn’s letter warns. “The viability of this solution is eroded by settlement activity , demolitions, confiscation and forced displacement, which are illegal under international law, especially the Fourth Geneva Convention. Each day the point of no return comes dangerously close . . .

“In this regard I believe it is time to start a debate within the EU on the opportunity of a recognition of the state of Palestine by all its member states.”

The issue is likely to arise on Monday under the “other business” heading without any formal decision. Mr Coveney is also expected to give a report to fellow ministers on his recent fact-finding trip to the Occupied Territories.

In a related development, the Court of Justice of the EU ruled last month that member states must identify products made in Israeli settlements on their labels. The court said that when products come from an Israeli settlement, their labels must provide an “indication of that provenance” so that consumers can make “informed choices” when they shop. The decision was strongly condemned by Israel and the US.

And they will debate Dutch proposals for a new global human rights sanctions instrument to strengthen the EU’s ability to target human rights abusers. It is understood the move has the strong support of the union’s special representative on human rights, Eamon Gilmore.