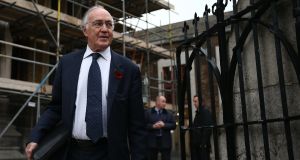 Boris Johnson suffered an overwhelming defeat in the House of Lords late on Monday over the Internal Market Bill, which would allow ministers to break international law by reneging on parts of the Brexit withdrawal agreement.

Peers voted by 433 to 165 to remove clauses from the Bill that would give ministers the right to unilaterally disapply parts of the Northern Ireland protocol.

Former Conservative leader Michael Howard, a leading Brexiteer, was among those who backed amendments that would remove the treaty-breaking clauses from the Bill.

“I want the independent sovereign state that I voted for to be a country which holds its head up high in the world, keeps its word, upholds the rule of law and honours its treaty obligations. I want it to be an independent country which truly is a beacon unto the nations.

“I am dismayed that the government – who I have supported for so long and have very rarely disagreed with and rebelled against – have chosen, as one of the first assertions of their newly won sovereignty, to break their word, to break international law and to renege on a treaty they signed barely a year ago,” he said.

Downing Street earlier said it would consider any Lords’ amendments to the Bill when it returns to the House of Commons but insisted the offending clauses were a necessary safety net to ensure Northern Ireland is not cut off economically from the rest of the United Kingdom.

Mr Johnson’s official spokesman said Britain continued to work with the EU in a joint committee tasked with agreeing how the Northern Ireland protocol should be implemented.

Former DUP MP Nigel Dodds said the protocol itself had created the problem by seeking to avoid a border on the island of Ireland by imposing one in the Irish Sea.

He said businesses in all parts of Northern Ireland and within all communities were worried about the impact of the forthcoming arrangements on trade with the rest of the UK.

“Many unionists in Northern Ireland feel deeply frustrated and angry tonight about the way in which it is okay to have a free border north/south but you can do whatever you like east/west.

“We must come to sensible, pragmatic arrangements. The Belfast Agreement and the St Andrews Agreement, which was negotiated by our party and Sinn Féin, are important to Northern Ireland. They must be implemented in a balanced way,” he said.

Former SDLP leader Margaret Ritchie said she shared the concerns of many in Northern Ireland about the impact of a rigid application of the protocol and she did not wish to see any new borders.

But she said the protocol was designed to protect the Belfast Agreement, to prevent a hard border and to assist with the process of reconciliation and North-South economic co-operation.

“In the Brexit process and all of this, the government managed to set the nationalist and unionist communities against each other and undermine relations with Dublin by leaving the possibility of a hard border on the island of Ireland on the table,” she said.