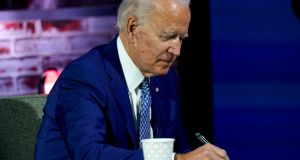 Simon Coveney said the election victory by Joe Biden (above) should help ensure ‘Irish issues are prioritised’ in the Brexit talks. Photograph: AP

The election of Joe Biden as the next US president should give the British government “pause for thought” as Brexit talks close in on their deadline, Minister for Foreign Affairs Simon Coveney has said.

Mr Coveney described this as “arguably the most important week” in the Brexit talks as the sides seek to resolve the remaining contentious issues before November 15th.

This deadline is to allow time for any deal to be ratified by the European Parliament before Britain’s standstill transition out of the EU expires at the end of the year.

British prime minister Boris Johnson is expected to suffer a defeat in parliament’s upper chamber on Monday over The Internal Market Bill which would allow him to breach Britain’s EU exit treaty - a proposal which has been criticised by Mr Biden.

The bill is designed to protect trade between Britain four nations but would also tear up the parts of the withdrawal agreement and specifically the Northern Ireland Protocol within it.

Mr Coveney noted Mr Biden had made it clear during the election campaign that he would not support a Brexit outcome that jeopardised the Good Friday Agreement.

“I think Joe Biden is a real friend of Ireland. He describes his life being shaped entirely by his roots in Ireland,” Mr Coveney explained on Monday.

“Not only from Joe Biden, but from many on Capitol Hill, if the Good Friday Agreement and the peace on the island of Ireland is not protected through Brexit, securing a trade deal between the UK and US could be problematic.

“I think this will be a cause for ’pause for thought’ in No10 to ensure that the Irish issues are prioritised as we try to close out this phase of the Brexit negotiations.”

Mr Coveney told RTÉ’s Morning Ireland said “a Biden presidency creates new opportunities like that which will result in less division in terms of international politics and we are a like-minded county with the EU and UK.”

Mr Coveney also said he had never threatened that a hard Brexit would make “life very difficult” for British Airways (BA) and its flights to and from continental Europe.

He was responding to comments made by Mr Trump’s special envoy for Northern Ireland Mick Mulvaney at the Institute of International and European Affairs (IIEA) last week.

Mr Coveney explained: “All I can say is I never mentioned BA and I didn’t mention the word ‘threat’ either.

Mr Coveney said if the UK breaks an international protocol it would “make agreement in lots of other areas a lot more difficult between the EU and the UK. This wasn’t a case of threatening anything.

“The point I was making, because the question I was asked, was if there isn’t a trade agreement and if the Internal Market Bill that’s being brought forward by the British government, were to be implemented, would that mean a hard border again on the island of Ireland or at least a question around that?

“My answer to that is no it wouldn’t because the EU I think would pursue international law - ie the implementation of the Withdrawal Agreement to make sure that the Irish protocol was implemented in full. I think that’s fully understandable.”