Cantillon: A future without a trade deal with either the EU or US would be far from the ‘sunlit uplands’ the Brexit camp promised voters 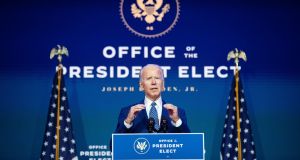 President-elect Joe Biden: his election immediately raised questions about whether it could cause a major change in London’s talks with the EU. Photograph: The New York Times

The new president-elect of the United States, Joe Biden, has leverage over the UK, and he has already threatened to use it.

He declared as much after London’s introduction of the Internal Markets Bill, which unpicks last year’s exit deal with the EU which was designed to ensure there would be no border across the island of Ireland. By the British government’s own admission it is against international law.

“We can’t allow the Good Friday Agreement that brought peace to Northern Ireland to become a casualty of Brexit,” the then-Democratic candidate announced. “Any trade deal between the US and UK must be contingent upon respect for the agreement and preventing the return of a hard border. Period.”

That’s why the news of Biden’s election immediately raised questions about whether it could cause a sea change in the EU’s talks with London, which have been trapped in a quagmire of disagreement and stalemate for most of the year.

The Brexiteer camp suddenly looked very isolated. A future without a trade deal with either the EU or the US would be far from the “sunlit uplands” they had promised voters.

Could Downing Street rethink its hard line positions and decide to compromise with the EU rather than going it alone?

Those were certainly the hopes of chief EU negotiator Michel Barnier as he headed for London to begin this week’s negotiations. There were three keys to a deal, he wrote: “effective governance and enforcement mechanisms”, “shared high standards, evolving coherently over time”, and reciprocal fishing and markets access “in the interest of both parties”.

These are slightly softened versions of the age-old sticking points of governance, the level playing field, and fishing rights. The EU feels that it has moved, and it is London’s turn to compromise now.

We will soon find out. If nothing has shifted by the end of next week, time may already have run out for a deal.