Analysis: as the cost to Britain of a no-deal rises, the EU can hold firm in coming days on the price of reaching one 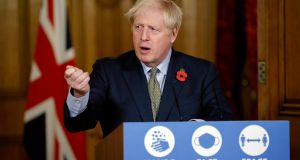 The Internal Market Bill’s treaty-breaking clauses, intended to give Britain more leverage in negotiations with the EU, have instead become a trap that has left Boris Johnson weaker as the talks enter their final stage.

As the House of Lords warmed up on Monday to reject the clauses as an assault on the rule of law, Downing Street doubled down on its characterisation of them as “a vital safety net” in case Britain does not agree in the joint committee with the EU on how to implement the Northern Ireland protocol.

“We remain committed to the joint committee process but we’ve included it in the legislation and we do think it’s necessary to have that safety net fallback so we’re proceeding with the plans as they were set out back at the start of the autumn,” the prime minister’s official spokesman said.

When the Bill returns to the House of Commons next month, MPs can restore the clauses thrown out by the Lords and the logic of the government’s position is that, without a satisfactory agreement in the joint committee, they must be restored. Yet the cost of restoring the clauses is immense for Britain’s relationship with Washington as well as with Brussels.

If the clauses remain in the bill the European Parliament is likely to refuse to ratify any free trade deal Britain agrees with the EU.

And Joe Biden has joined leading congressional Democrats in making clear that there will be no US-UK trade deal unless the clauses are removed.

Some in Whitehall have sought to reassure themselves in recent days that the “special relationship” will survive early friction with a Biden White House over Brexit.

It is true that the institutional links between London and Washington, particularly in defence and security, have remained strong through every change of government since the second World War. But as John Major discovered when Bill Clinton became president, a change of government in Washington can bring a chill wind even to the closest of allies.

And Britain’s exit from the EU has diminished its value as an ally.

If Johnson fails to agree a trade deal with the EU in the next couple of weeks he will struggle to justify to his own party and his Brexiteer supporters the removal of clauses he has portrayed as a safeguard against the EU’s bad faith.

And as the cost to Britain of no deal rises, the EU can hold firm in the coming days on the price of reaching one.