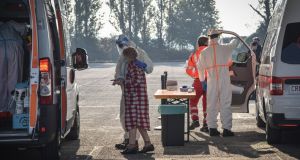 Medical personnel transport a Covid-19 patient to a coronavirus facility area set up by the Italian army to lighten the workload for hospitals in Milan. Photograph: EPA/MATTEO CORNER

Italian doctors have called for the government to impose a nationwide lockdown to prevent thousands more deaths after a surge in Covid-19 infections they say threatens thousands of deaths within weeks.

Italy was slower to see the resurgence in the disease that has swept Europe, and authorities hoped that careful precautions and testing could help the country that was the first to be hit hard in spring to be spared the worst in autumn.

But infections have spiked in the past four weeks and reached almost 40,000 new cases registered in a 24-hour period over the weekend, with hospitals under pressure across the country.

Photographs of queues of ambulances waiting to discharge patients at overburdened hospitals in the country’s north and south have caused alarm, as the number of people being treated in hospital has surpassed 26,000.

Deaths have also reached rates not seen since before the summer, with between 300 and 450 people dying each day in the past week.

The Italian Order of Doctors called for the government to set aside its reservations and put in place a national lockdown, warning that hospitals were becoming overwhelmed and that there would be 10,000 deaths from Covid-19 in a month if infections were not brought under control.

“Within a month if this trend does not change, we will have 10,000 more deaths, and we will exceed the threshold of our 5,000 intensive care beds,” said the organisation’s president, Filippo Anelli. “The scenario facing us is dramatic, not just for those sick with Covid, but for the treatment of all those who are ill with other illnesses. For this reason we need drastic measures such as a total lockdown,” he said.

Lombardy, the region hardest hit in the spring, continues to be the worst affected, and hospitals in Bergamo which were at the epicentre of the outbreak warned they were running out of beds.

The autumn surge of the virus in Europe has affected alike countries that were badly hit in the spring and those that escaped the worst of the first wave. Hungary, which had just roughly 100 cases a day during its peak earlier this year, now has more than 6,000 Covid-19 patients in hospitals. The government has imposed new restrictions including the shutting of secondary schools, restaurants and bars and setting a national 8pm curfew in a bid to curb infections and prevent its healthcare system being overwhelmed.

In Switzerland, where infections and deaths have been roughly doubling each week, army reservists took up posts in hospitals this weekend to help with basic care and to transport patients.

There was more positive news from Belgium, which has one of the world’s highest death rates from the disease. Virologist Yves Van Laethem told a press conference at the coronavirus crisis centre that restrictions had succeeded in slowing the spread of the virus, and that he was hopeful that hospital admissions had peaked, “subject to an unpleasant surprise”.