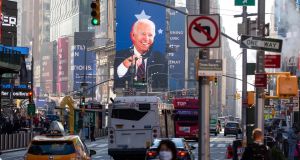 An image of US president-elect Joe Biden on a screen in the Times Square area of New York. Photograph: Michael Nagle/Bloomber

US president-elect Joe Biden pledged to do “everything possible” to bring Covid-19 under control as he outlined his coronavirus strategy at a press conference in Delaware.

Mr Biden began the first working day since his victory in the US presidential election meeting with health experts and announcing details of a new 13-member coronavirus advisory board, which will counsel him on the pandemic as he prepares to assume the presidency on January 20th.

He was speaking as more members of the Trump administration, including housing and urban development secretary Ben Carson, tested positive for Covid-19.

In a televised speech from Wilmington, Mr Biden welcomed the outcome of Pfizer vaccine tests showing a success rate of more than 90 per cent. However, he warned that the US was “still facing a dark winter”.

“It’s clear that this vaccine, even if it is approved, will not be widely available for many months yet to come. The challenge before us right now is still immense and growing, and so is the need for bold action to fight this pandemic,” he said.

Emphasising the importance of wearing face masks, he said: “It doesn’t matter who you voted for. We are American and our country is under threat.

“We have to come together to heal the soul of this country so we can effectively address this crisis as one country, where hardworking Americans have each other’s backs and are united in our shared goal of defeating this virus.”

In contrast to President Donald Trump’s public comments on the pandemic to date, Mr Biden concluded his comments with a reference to Americans who had lost loved ones. ”Our heart goes out to you. May God protect our health workers, our healthcare workers and all Americans.”

Mr Biden was speaking as the number of Americans infected by coronavirus was set to surpass 10 million, with more than 100,000 people testing positive for Covid-19 on Sunday alone. The increase in infection rates has prompted fears of a new coronavirus wave in the US as cold weather approaches.

Separately, vice-president Mike Pence was scheduled to chair a meeting of the coronavirus task force on Monday as he returned to work in the White House following the declaration of Mr Biden’s victory in the election.

Several members of the White House team have tested positive, some of whom attended Mr Trump’s speech in the East Room in the early hours of Wednesday last week when he incorrectly claimed that he had won the election.

News that Mr Carson, a medical doctor, had contracted the disease, followed confirmation at the weekend that White House chief-of-staff Mark Meadows had also tested positive.

Among the members of Mr Biden’s new advisory board is Rick Bright, a top immunologist who was ousted as the head of a federal medical research agency by the Trump administration after he submitted a complaint to Congress about the government’s coronavirus strategy.

The remaining members are all medical experts, including Vivek Murthy who served as surgeon general under then president Barack Obama.