The leader of the House of Commons, Jacob Rees-Mogg, has been criticised after he claimed that victims of the Grenfell Tower fire should have used "common sense" and ignored fire brigade warnings to stay in the building. Video: LBC 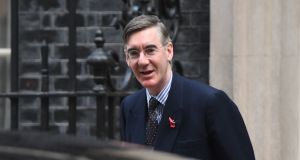 Leader of the House of Commons Jacob Rees-Mogg: “I think if either of us were in a fire, whatever the fire brigade said, we would leave the burning building,” he told LBC. Photograph: Kirsty O’Connor/PA Wire

Attempts by the Tory politician Jacob Rees-Mogg to draw a line under remarks stating that the victims of the Grenfell fire lacked “common sense” have drawn a furious reaction from survivors and campaigners.

The rapper Stormzy joined relatives including the nephew of a Grenfell Tower victim who died after being told to stay put by London Fire Brigade in angrily dismissing the cabinet ministerfor remarks he made stating that victims did not use “common sense” and leave the burning building.

The leader of the House of Commons issued “a profound apology” after he told a radio interviewer: “I think if either of us were in a fire, whatever the fire brigade said, we would leave the burning building. It just seems the common sense thing to do.”

But he faced a wave of anger at the suggestion. Karim Mussihly, whose uncle Hesham Rehman (57), died on the floor, said Mr Rees-Mogg was an “idiot” whose remarks revealed the detachment of the British government from the Grenfell community.

“The apology is too late,” he said. “Sorry means nothing. It’s such an easy word to say. Your action means something but we have had words and no action.”

Mr Rees-Mogg’s comments sparked a wave of revulsion. The Justice 4 Grenfell group described his original comments as “appalling” and Jeremy Corbyn described them as “crass” and “insensitive”.

“What possesses someone to react to an entirely avoidable tragedy like Grenfell by saying the victims lacked common sense?” the Labour leader tweeted.

A man who lost five relatives in the Grenfell Tower fire has demanded that Jacob Rees-Mogg says sorry for "insensitive" comments he made.

He said it was common sense not to obey the fire brigade's 'stay put' instructions during the fire.https://t.co/m5BadAVANb

Stormzy, who has been long term supporter of the Grenfell survivors and spoke out against former prime minister Theresa May’s response to the disaster, called on him to resign, tweeting: “these politicians are actual aliens”.

The anger at Mr Rees-Mogg was compounded when it emerged on Tuesday that the British government has placed the builder that oversaw the disastrous refurbishment of Grenfell on an official list of firms recommended to public sector bodies seeking builders for high-rise housing in the south of England.

That decision only added “insult to injury”, according to Grenfell United, the bereaved and survivors’ group, and shocked many in the community less than a week after the chairman of the public inquiry into the disaster concluded the London Fire Brigade’s planning was “gravely inadequate” and that the building works broke building regulations.

Prime minister Boris Johnson said he accepted the report and promised: “Where action is called for, action will follow.”

“It makes me so angry,” Mr Mussihly said. “The detachment from the politicians in this government is still alive. This tragedy was supposed to shake and awake this nation. Two and a half years on these types of comments from a cabinet minister should not exist. People like my uncle couldn’t leave the tower even if they wanted to and was told on several occasions firefighters were coming to get him. He took comfort in that. Did he not use his common sense? They are still detached. They are still clueless.”

Sir Martin Moore-Bick, who is leading the Grenfell inquiry, said more lives could have been saved if the London Fire Brigade dropped its “stay put” policy sooner as they tried to tackle the blaze.

Many remained in their flats for several hours as the fire tore through the building and were trapped by heat and smoke. It emerged that 55 of the 72 people who died in the fire, on June 14thm 2017, were told to remain in their homes.

In his apology, Mr Rees-Mogg said: “What I meant to say is that I would have also listened to the fire brigade’s advice to stay and wait at the time. However, with what we know now and with hindsight I wouldn’t and I don’t think anyone else would.

“I would hate to upset the people of Grenfell if I was unclear in my comments. With hindsight and after reading the report no one would follow that advice. That’s the great tragedy.”

Shadow secretary of state for housing John Healey said it was shocking for Mr Rees-Mogg to suggest that those who died in the fire lacked common sense. “They were told to stay where they were by the fire service, who were acting on national guidelines,” he said.

The victims of the fire included six members of the same family, the Choucairs, and five members of the Hashim family, who all lived on the 22nd floor. The youngest victim was a six-month-old baby, Leena Belkadi, and baby Logan Gomes was stillborn in hospital on June 14th. – Guardian