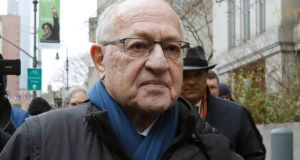 Alan Dershowitz: Over the years, he has put himself on the side of an impressive pantheon of villainy in the realm of violence against girls and women. Photograph: Richard Drew

Can a woman be president of the United States? Hell, yes. I’ve covered the men who run the world my whole life. And there have been a lot of screw-ups, from Vietnam to Watergate to Afghanistan to Iraq to pushing the economy off a cliff. There has also been plenty of creepy behaviour, culminating in the news that Donald Trump, Ken Starr and Alan Dershowitz have joined together in a pervy, hypocritical cabal to argue that Trump did not smirch the constitution.

So please, Elizabeth Warren and Amy Klobuchar, stop whingeing about sexism and just show how you could wield power like a boss. Ibid: Nancy Pelosi. When Steve Bannon called Pelosi a “total assassin”, according to the hot new book A Very Stable Genius, by Washington Post writers Phil Rucker and Carol Leonnig, he meant it as the highest compliment. You won’t find Pelosi keening about gender; she’s too busy taking care of business.

Hillary Clinton did not lose because she was a woman. She faced sexism, of course, just as Barack Obama faced racism. She lost because she ran an entitled, joyless, nose-in-the air campaign and because she didn’t emulate her husband’s ethos of campaign till the last dog dies and the last bowling alley closes, and always make it about the voters. She lost because she and her campaign manager, Robby Mook, didn’t listen to Bill Clinton, the world’s leading expert on the white, male, rural vote, when he warned them that there was trouble and offered to help out.

Trump operates from the id, which is fitting because he represents a last-gasp primal scream from working-class Americans

Trump operates from the id, which is fitting because he represents a last-gasp primal scream from working-class Americans threatened by the changes transforming the country. Women are now a majority of the workforce and whites are heading toward a minority status. Hollywood cannot cling to its benighted – and self-defeating – desire to stay a white male club forever, despite the fact that women have always made up half the audience.

Trump’s ascent does not make it harder for women to ascend – just the opposite. Look at the throng of women who were outraged enough about Trump to march and run and get elected in 2018. Once a woman electrifies Democrats the way JFK, Bill Clinton and Barack Obama did – and the way Trump does his base – she will win.

Trump is once more doing his part to energise women voters. On Friday, we learned that the president will get help from Starr and Dershowitz for the impeachment trial in the Senate. The Starr chamber was a shameful period of US history, with the prissy puritan independent counsel hounding and virtually jailing Monica Lewinsky and producing hundreds of pages of panting, bodice-ripping prose that read more like bad erotica than a federal report, rife with lurid passages about breasts, stains and genitalia. Like the Rev Arthur Dimmesdale and other Pharisaic Holy Rollers before him, the prosecutor who read the Bible and sang hymns when he jogged became fixated on sex in an unhealthy, warped way.

Even Trump was appalled. “Starr’s a freak,” the bloviating builder told me back in 1999. In other interviews, he called Starr “a lunatic”, “a disaster” and “off his rocker”, and expressed sympathy for Hillary having to stand by her man when he was “being lambasted by this crazy Ken Starr, who is a total wacko”.

Starr, who once clutched his pearls over Bill Clinton’s sexual high jinks, is now going to bat for President “Access Hollywood”. After playing an avenging Javert about foreplay in the Oval, Starr will now do his utmost to prove that a real abuse of power undermining Congress and American foreign policy is piffle.

In 2007, he defended Jeffrey Epstein. By 2016, Starr was being ousted as president of Baptist Baylor University for failing to protect women and looking the other way when football players were accused and sometimes convicted of sexual assaults. In other words, he’s a complete partisan hack who doesn’t give a damn about sexual assault.

And then there’s Dershowitz, whose past clients have included such sterling fellows as Epstein, Claus von Bulow, OJ Simpson and Harvey Weinstein. How did he miss Ted Bundy? Still, Dershowitz has put himself on the side of an impressive pantheon of villainy in the realm of violence against girls and women.

Dershowitz's past clients have included such sterling fellows as Jeffrey Epstein, Claus von Bulow, OJ Simpson and Harvey Weinstein. How did he miss Ted Bundy?

Virginia Giuffre, Prince Andrew’s accuser, has also claimed she was offered as a teenager to Dershowitz for sex – a contention that Dershowitz has denied in a countersuit.

On Fox News, Dershowitz has made the case that it is Pelosi who put herself above the law by delaying the delivery of the articles of impeachment. Good luck with that one. The Government Accountability Office, a nonpartisan government watchdog, a few days ago deemed that Trump’s slimy Ukraine gambit violated a law. Yet Dershowitz will somehow argue that it doesn’t represent high crimes and misdemeanours. He tweeted that he’s nonpartisan because he opposed Bill’s impeachment and voted for Hillary, even as he joined up with Bill’s persecutor.

Dershowitz said he is participating “to defend the integrity of the Constitution”. That assertion may fly in Foxworld. But in the real world, it’s ridiculous. You can bet that Trump and his buddies will continue to turn out the women’s vote. – New York Times Service