‘You called me a liar on TV’: CNN releases audio of Warren-Sanders exchange 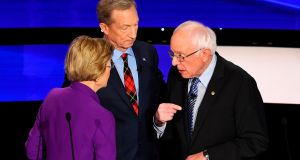 CNN has released the audio of the testy exchange between Elizabeth Warren and Bernie Sanders that took place following Tuesday’s Democratic debate.

After the debate wrapped, Bernie Sanders outstretched his hand to Elizabeth Warren. Ms Warren did not take it, and the two progressive candidates, who until recently have avoided criticising each other publicly, exchanged words – which until now were inaudible.

On Wednesday, CNN’s Anderson Cooper released audio of the conversation.

“I think you called me a liar on national TV,” Ms Warren said to Mr Sanders.

“Let’s not do it right now,” Mr Sanders responded. “You called me a liar.”

Meanwhile, Tom Steyer, caught awkwardly between the longtime friends and colleagues, said: “I don’t want to get in the middle ... I just wanted to say ‘Hi,’ Bernie.”

Elizabeth Warren: "I think you called me a liar on national TV."

Bernie Sanders: "You know, let's not do it right now." pic.twitter.com/Ad0VN53Xux

Tuesday’s debate, the final one before the Iowa caucuses next month, deepened the schism between two over a report that Mr Sanders told Ms Warren during a private meeting in 2018 that he did not think a woman could win the 2020 election.

Mr Sanders has vehemently denied that he said it, while Ms Warren has released a statement contradicting him.

“Among the topics that came up was what would happen if Democrats nominated a female candidate,” Ms Warren said in the statement on Monday evening, recalling the meeting. “I thought a woman could win; he disagreed. I have no interest in discussing this private meeting any further because Bernie and I have far more in common than our differences on punditry.”

“Well, as a matter of fact, I didn’t say it,” Mr Sanders said, implying that Ms Warren, who confirmed the report, was lying.

Ms Warren said she “disagreed” with Mr Sanders that a woman couldn’t win, pointing out that she was the only candidate on stage who had beaten an incumbent Republican in the past 30 years. “Look at the men on the stage – collectively they’ve lost 10 elections,” she added.

Following the debate, progressive activists worried that escalating tension between Ms Warren and Mr Sanders could divide liberals. One activist and writer used a Lord of the Rings analogy. “Frodo and Samwise are approaching Mt Doom, and instead of finishing the darn mission they’re fighting each other when at the end of the day we need to defeat Sauron,” said Julian Brave NoiseCat, a Guardian contributor and strategist for the thinktank Data for Progress, in an interview with Democracy Now.

Mr Sanders’ wife, Jane O’Meara Sanders, downplayed lasting repercussions of the rift. “The message is unity,” she told the Associated Press. “We’re not going to go into that realm. We’re just not going to play that game.”

Neither Ms Warren’s nor Mr Sanders’ campaign responded immediately to a request for comment on the new audio. – Guardian