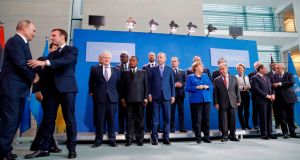 Leaders and lawmakers from 10 countries are attending talks in Berlin aimed at bringing an end to the protracted conflict in Libya. Photograph: Odd Andersen/AFP via Getty

Libya’s warring factions and their respective international allies agreed in Berlin on Sunday on a renewed weapons embargo in a bid to end the long-running conflict in the North African country.

The agreement came at the end of talks hosted by German chancellor Angela Merkel, attended by Fayez al-Sarraj, head of Tripoli’s internationally recognised government and his rival, the renegade military commander Khalifa Haftar.

The two men did not meet directly but were closely involved in a communique proposing a new political process that received the backing of leaders and lawmakers from 16 countries and international bodies. The UN-backed meeting in the German capital was the first such gathering since 2018.

“We can take note that all are agreed that we want to respect the weapons embargo and that the embargo will be more strongly controlled than was the case in the past,” said Dr Merkel on Sunday evening in the chancellery after a day of round-table talks and shuttle diplomacy.

Libya has had no stable government since dictator Muammar Gadafy was toppled and killed by NATO-backed rebels in 2011. Since then western and Arab countries have been closely involved in the chaotic aftermath, supplying arms and drones to the warring factions.

Sunday’s communique acknowledges that no military solution exists for the Libyan conflict and that further military action will only increase further civilian suffering. The battle for the capital Tripoli has left around 2,000 people dead and displaced 100,000 more, with neither side able to press their advantage.

The statement adds: “We commit not to get involved in the armed conflict or in the internal affairs of Libya.”

Leaders in Berlin agreed to a far-reaching demobilisation of militias in the country and tougher sanctions for ceasefire breaches. But it remains to be seen whether the embargo – broken continuously in the past – can be more effectively policed this time around.

The warring sides agreed a ceasefire earlier this month but Haftar departed talks in Moscow on January 12th before signing a formalised agreement with al-Sarraj.

This legitimate government – with allies including Qatar, Italy, Algeria and Turkey as its most important supporter – enjoys little authority and is dependent on militias to keep at bay the forces of General Haftar.

A former senior army officer who fell out with dictator Muammar Gadafy in the late 1980s, Haftar returned from a 20-year exile during the country’s 2011 revolution to head the Libyan National Army of professional soldiers, elements of the Libyan military and local militias as well as Islamist groups. He is backed by the UAE, Egypt, France, Jordan and, most recently, Russian mercenaries.

Ahead of the Berlin conference, Al-Sarraj vowed to “defend” Tripoli in the case of an inconclusive conference outcome and cast doubt on Haftar’s agenda.

Among those attending the Berlin talks were leaders of France Italy, the UK and US Secretary of State Mike Pompeo, as well as attendees from the United Arab Emirates, Egypt, Algeria, China and the Republic of Congo and international organisations: the UN, African Union, Arab League and EU.

European leaders in particular know that securing peace in Libya is of strategic importance to ease the far-reach pressures caused by the flows northward of Libyan refugees fleeing their war-torn African country.

Concluding the talks on Sunday evening in Berlin, Dr Merkel played down her foreign policy success, saying she has “no illusions that this will still be a difficult path ahead”.

1 Coronavirus: What we know so far about how Ireland is affected
2 Cancellations and confusion as coronavirus threat edges closer
3 Mass gatherings due to go ahead in Ireland amid coronavirus outbreak
4 ‘Several killed’ in shooting at Milwaukee brewing company
5 Couple challenge decision over access to Killarney lake
Real news has value SUBSCRIBE