Londoners generally expressed their support for Prince Harry and his wife Meghan following the news that they will no longer be working members of Britain's monarchy. Video: Reuters 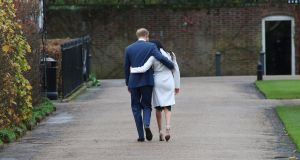 Buckingham Palace said in a statement on Saturday: “The Sussexes will not use their HRH titles as they are no longer working members of the Royal Family.” Photograph: Neil Hall/EPA

Boris Johnson has wished Prince Harry and his wife, Meghan, well after Buckingham Palace announced that the couple will give up royal duties, receive no public funds and no longer formally represent Queen Elizabeth. But the British government has given no details about the cost of providing security for the couple or how the burden will be shared between Britain and Canada.

“I think the whole country will want to join in wishing them the very best for the future,” the prime minister said in Berlin, where he was attending an international summit on the future of Libya.

The palace said on Saturday that from spring this year, the couple will no longer use their HRH titles but be known as the Duke and Duchess of Sussex. They have agreed to repay £2.4 million in public funds spent on refurbishing Frogmore Cottage, the house at Windsor that will continue to be their home when they are in Britain and for which they will pay rent at commercial rates.

They will step back from all royal duties and Prince Harry will lose all his official military appointments, including the role of Captain General of the Royal Marines. The couple will be free to make money through business ventures of their own, which will not be vetted or require approval from the palace.

In a statement, the queen said the duke and duchess and their son, Archie, would always remain “much loved” members of her family.

“I recognise the challenges they have experienced as a result of intense scrutiny over the last two years and support their wish for a more independent life. I want to thank them for all their dedicated work across this country, the Commonwealth and beyond, and am particularly proud of how Meghan has so quickly become one of the family,” she said.

Labour’s shadow business secretary, Rebecca Long Bailey, who is a candidate to succeed Jeremy Corbyn as leader, said the duchess had been subjected to racist and intrusive treatment by the British press.

“A young couple have been hounded out of the country by the intrusive and racist treatment of the right-wing press. Women of colour in public life are subject to bullying, harassment, disrespect and smears – and all the while are expected to be grateful that they’re getting any attention at all,” she said.

“The toxic combination of sexism and racism that runs rife through the right-wing press must be stopped. As leader of the Labour Party, I will do everything I can to fight it.”

The duchess is suing the Mail on Sunday for publishing correspondence between her and her father, Thomas Markle, without her permission and Prince Harry is suing the Sun and the Daily Mirror over phone hacking. In a documentary to be broadcast on Channel 5, Mr Markle has accused the couple of cheapening the royal family.

“This is like one of the greatest long-living institutions ever. They are destroying it, they are cheapening it, they’re making it shabby ... They are turning it into a Walmart with a crown on it now,” he said.