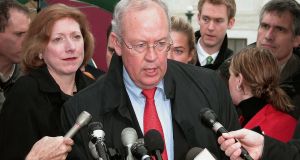 Former special counsel Kenneth Starr – a key figure in Bill Clinton’s impeachment 21 years ago – has been added to US president Donald Trump’s legal team ahead of next week’s Senate trial.

The White House confirmed that Mr Starr, a regular contributor on Fox News whose work as independent counsel led to Mr Clinton’s impeachment, will join a team of lawyers defending the president in his impeachment trial.

Alan Dershowitz, a high-profile Harvard emeritus professor whose past clients include OJ Simpson, will also join the team, as well as Robert Ray, who took over the Clinton investigation from Mr Starr. Former Florida attorney general Pam Bondi and Miami lawyer Jane Raskin, a personal attorney to Mr Trump, will also represent the president.

White House counsel Pat Cipollone and Mr Trump’s personal lawyer, Jay Sekulow, will lead the defence, though all members of the team are expected to speak on the Senate floor during the trial.

In a statement, Mr Trump’s legal team said that Mr Dershowitz will “address the constitutional arguments against impeachment and removal”. It also noted that he is a “non-partisan” figure, having opposed Mr Clinton’s impeachment and voted for Hillary Clinton, but “believes the issues at stake go to the heart of our enduring constitution”.

“He is participating in this impeachment trial to defend the integrity of the constitution and to prevent the creation of a dangerous constitutional precedent,” the statement added.

The seven members, led by House intelligence committee chairman Adam Schiff, will set out the prosecution case against the president. Both teams are expected to spend the weekend preparing their legal arguments ahead of the opening of the impeachment trial on Tuesday afternoon.

New information from Lev Parnas, an associate of Mr Trump’s personal lawyer Rudy Giuliani who was indicted last year, suggested that he was involved in a surveillance campaign against the former US ambassador to Ukraine, Marie Yovanovitch. The senior diplomat, who testified during the impeachment inquiry in November, was fired by Mr Trump and secretary of state Mike Pompeo last summer.

In an interview on Friday, Mr Pompeo said he would look into the allegations of surveillance of the US diplomat before she left Kiev. But he said that he suspected that much of what had been reported would be proved wrong.

“We will do everything we need to do to evaluate whether there was something that took place there,” he said in a radio interview. “I suspect that much of what’s been reported will ultimately prove wrong, but our obligation, my obligation as secretary of state, is to make sure that we evaluate, investigate. Any time there is someone who posits that there may have been a risk to one of our officers, we’ll obviously do that.”

Mr Pompeo’s comments came a day after the Ukrainian authorities announced the opening of a criminal investigation into the allegations.

Mr Parnas told CNN that he directly discussed Ms Yovanovitch with Mr Trump at a meeting last year, and that the president had told his counsellor to fire her. Both Mr Trump and Mr Pompeo have denied knowing Mr Parnas and have questioned his reliability as a witness.