Harry and Meghan’s flight from royal embrace not the first

London Letter: ‘We always said we would never talk about what might have been’ 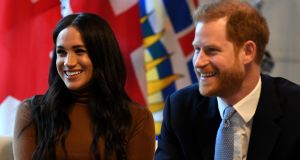 The duke and duchess looked awkward, even pained, as they answered the interviewer’s questions, all of which had been agreed in advance and rehearsed before the live broadcast, along with the answers. While the duke was giving a short monologue about the difficulty of making plans for the future and how it takes care of itself in any case, the duchess patted the side of his head to put a stray hair back in place.

The interview was progressing jerkily but without drama until the interviewer surprised the couple with an unscripted question.

“Do you ever have occasion to discuss what might have been?” Ed Murrow asked.

The Duke of Windsor, formerly King Edward VIII, shot his wife a frightened look, twisted in the corner of the sofa for a moment and leaned so far forward that his head was almost between his knees as he stared at the floor.

“I think you must be referring to the crucial events in my life, in our lives, of 1936 and are wondering whether they have ever preoccupied our minds since that time. Well, the answer is emphatically no,” he said.

The duchess, formerly Wallis Simpson, looked away, fidgeted and appeared stricken as he spoke, until she leaned across, laid a hand on his arm and gave him a firm reminder.

“Don’t you remember we always said we would never talk about what might have been,” she said.

“In fact, I think we arranged that pact on our honeymoon.”

Wednesday’s announcement by Harry and Meghan, the Duke and Duchess of Sussex, that they were quitting their roles as senior members of the British royal family has drawn comparisons with the Windsors. Like the earlier duke, Harry is a popular young royal who has put his wife before his role in the family and angered his relations and the establishment around them in doing so.

Like the Windsors, the Sussexes are planning to leave Britain – at least for part of the year when they will base themselves in north America, probably in Canada. And like the Duke of Windsor, Harry wants the best of both worlds, retaining his royal title and many of its privileges, including the use of Frogmore Cottage, which was renovated recently at the cost to the public purse of £2.4 million (€2.8 million).

Their decision has created problems for the royal family

Unlike the Windsors, however, the Sussexes are entering their new life voluntarily and with their eyes wide open, fully prepared to exploit their status commercially and sufficiently ruthless to outwit the merciless Buckingham Palace press machine by making their announcement without warning.

Their decision has created problems for the royal family, not least because the system does not allow for princes to be semi-royal or to pick and choose among the privileges and duties of their role. Other royals who have tried to make an independent living, including Prince Edward, Princess Michael of Kent and Sarah Ferguson, have quickly become embroiled in conflicts of interest as it was impossible to disentangle their commercial entities from their royal identity.

On the other hand, Harry and Meghan were clearly unhappy as senior royals and their departure now should take care of a problem that might otherwise have erupted when Prince Charles succeeds Queen Elizabeth. Charles’s accession will be complicated enough by arguments over the status of his wife Camilla, his desire to put his individual mark on the monarchy and questions about the legitimacy of the institution after the death of the queen.

Harry and Meghan have a powerful network of friends in the US entertainment industry, including Oprah Winfrey, who can help them to find a financially rewarding new role, and the duchess already knows success as an actor. But the adjustment for Harry could prove difficult after a lifetime as what the Duchess of Windsor called a “bell pusher”, who has, apart from his time in the army, always had someone available to answer the bell and give him what he wants.

I think he played a lot of golf. I don’t think he was very good but he liked the exercise

Diana Mosley, one of the Mitford sisters and the wife of the British fascist leader Oswald Mosley, was a close friend of the Windsors when they lived in France. She recalled after his death how the duke eased his homesickness by creating an English garden but how he was unable to find a satisfying role in life after he gave up the one he was born to.

“In the winter, when there was no gardening in France, you see they were nearly always in America. Then I think he played a lot of golf. I don’t think he was very good but he liked the exercise,” she said.

“Perhaps he’d have played less golf if he’d been in England and he had a few foundation stones to lay or something. But he hadn’t.”