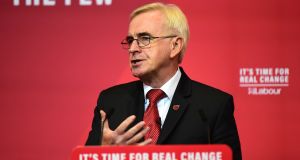 After a succession of self-inflicted mishaps destabilised the start of the Conservative election campaign, Labour ran into its first serious bout of turbulence on Thursday. Ian Austin, who resigned the Labour whip last February, said Jeremy Corbyn was not fit to be prime minister and urged “decent, patriotic Labour voters” to back Boris Johnson instead.

Austin had already announced that he would not stand in Dudley North, which he won for Labour in 2017 with a majority of 22 votes, and his intervention will boost Conservative hopes of taking the seat next month. John Woodcock, who was suspended by Labour in April and said this week that he would not contest his seat in Barrow and Furness (majority 209), followed suit a few hours later in urging people to vote Conservative.

In their criticism of Corbyn, Austin and Woodcock reminded voters of the Labour leader’s inadequate response to the issue of anti-Semitism in the party as well as accusing him of lacking patriotism. But their intervention also served to divert attention from the previous night’s surprise announcement that Tom Watson was stepping down as Labour’s deputy leader and leaving politics.

Watson was a much more formidable adversary of Corbyn’s within the party than Austin or Woodcock and his departure is a significant moment for Labour, tightening further the leader’s grip on the internal levers of power. But his parting was cordial, with Corbyn recalling “our very convivial chats” about cycling, exercise and horticulture, adding “I hope the horseradish plants I gave you thrive”, and Watson promising to campaign for Labour.

The Conservatives will hope that Labour’s trouble will help voters to forget about Jacob Rees-Mogg’s suggestion that the Grenfell Tower fire victims could have used more “common sense” and the resignation of Welsh secretary Alun Cairns after a former aide was accused of sabotaging a rape trial.

Both parties on Thursday put the focus on the economy, with Labour’s shadow chancellor John McDonnell promising an enormous increase in public investment over the next 10 years. Labour had already promised to spend £250 billion (€290 billion) on a “green transformation fund” to upgrade energy, transport and other networks and meet the target of zero carbon emissions by 2030.

McDonnell told a campaign event in Liverpool that he would spend an additional £150 billion on a “social transformation fund” to improve schools, hospitals, care homes and council houses. Taken together, the pledges would double the level of public investment in the British economy, moving the country from close to the bottom of the international league table to near the top.

With long-term government borrowing rates effectively negative, Labour would fund its plans by issuing long-dated bonds and keep the spending off the government balance sheet.

Chancellor of the exchequer Sajid Javid also announced a debt-funded investment plan on Thursday and although his proposal is more modest than Labour’s, it would bring public investment spending to 3 per cent of GDP, a level not seen in Britain for 40 years. Javid sought to present the Conservative plan as more fiscally responsible than Labour’s but as the Evening Standard (edited by former chancellor George Osborne) warned, he is walking a perilous path.

“The risk is that they blur a distinction that should be clear: yes, the Tories want to spend billions more; but Labour want to spend a great deal more billions than that. That’s the real choice. What isn’t a choice is that the ordinary taxpayer will pick up the bill. Because all borrowing is just higher taxes deferred,” the paper said.

Paul Johnson, director of the Institute for Fiscal Studies, warned that the next government could find that borrowing such massive sums is easier than spending it. He told the BBC that building hundreds of hospitals, windfarms and other infrastructure projects would have to be done gradually.

“Do we really have tens, if not hundreds, of thousands of construction workers, lying idle at the moment, who would be able next week or next year or even in a couple of years to start doing this? I think the answer is almost certainly no,” he said.

“It obviously takes a long time to go through the planning and sorting out things. If anyone’s ever had to sort out an extension to the house or something, they know that getting the building started isn’t something that happens next week.”