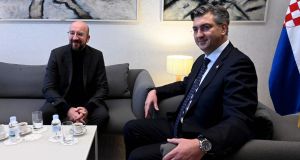 Ireland is not alone among EU states preoccupied with borders dividing its people. What Brexit may yet do to the island, accession to the EU seven years ago has already done to Croatia.

The obligation of membership to protect the external border of the union has forced Croatia, which has just assumed the EU presidency for the first time, to put up a hard border between it and Bosnia Herzegovina, where many ethnic Croats reside.

The border is not a fence or barbed wire, but a 1,500km unmarked line overseen by some 6,500 Croatian border guards. “I would never build a fence between Croat and Croat,” says Croatia’s prime minister Andrej Plenkovic. He could be channelling Leo Varadkar – both are learning how seriously the EU takes protecting its external border.

But safeguard it against the Mediterranean migrants who have used it to enter the EU, Plenkovic must, most importantly to demonstrate that Croatia can be trusted to join the passport-free Schengen travel area.

It is a controversial process – allegations are made that heavy-handed policing, including beatings, even torture, and forced returns across the border into Bosnia Herzegovina, have been used against hapless migrants. Not, of course, against fellow Croats.

Plenkovic insists that police abide by national and international law, and that the authorities have gone to great lengths to investigate every claim. Only one has been substantiated, leading to one officer being punished, he says.

Croatia hopes to use its first EU presidency to make its case for Schengen and euro membership – it is qualified, according to the European Commission. No-one will be a better team player, Zagreb hopes to show in the coming six months.

Foreign minister Gordan Grlic Radman approaches the challenge with relish and self-deprecating realism. He quotes his former Danish counterpart in 2017, in a telling swipe at the UK: “There are two kinds of European nations: small nations, and those who have not yet realised they are small nations.” Croatia knows it is a small nation.

Managing the EU agenda is the key task of a presidency, and Croatia has a full to-do list ranging from initiating the next phase of the Brexit process, the preparation with Michel Barnier of a negotiating mandate for future-relationship talks, to completing the fraught negotiations on the EU’s 2021-27 budget (the MFF).

Plenkovic’s own priority, he told a group of visiting Brussels-based journalists, is reinvigorating the accession process for the countries of the western Balkans with a special summit in May – at the December summit France’s president, Emmanuel Macron, blocked the opening of talks with North Macedonia and Albania. Macron said he would not support any new accession talks without fundamental reform of the EU’s exhaustive and exhausting enlargement process.

European Council president Charles Michel was here on Thursday and both he and Plenkovic spoke of a new opportunity, “a positive evolution” in French attitudes. Both saw movement on “the methodology of enlargement”, Plenkovic insisting that current procedures already incorporated the idea of the reversibility of the process, a key French demand.

Success by the May summit in advancing the case for North Macedonia and Albania, who will anyway face many years of talks before they join, will be seen as as an important agreement “that will turn a page” in enhancing regional security, Plenkovic says.

The task of brokering the last stage of the MFF talks has been passed from the presidency to “honest broker” Michel, leaving the Croats to articulate their own case for continued cohesion and farm funding.

Unlike the other countries of central and eastern Europe, who benefited to the tune of some €645 billion in pre-accession funding, Croatia never, it says, got the helping hand needed to catch up.

The country is a leading light in the “Friends of Cohesion” group of 16 net beneficiaries of EU membership in a battle complicated by what Michel describes as the €60 billion Brexit gap.

Michel was on Thursday refusing to put a timetable on the talks – a summit expected to resolve the issue in February has yet to be confirmed.

But an assertive Michel confidently articulated a new EU determination to stamp its mark on world affairs and no longer to be “just an observer of what others decide for us . . . I want Europe to be part of the game”.

On Thursday he spoke at length to Iran’s president, Hassan Rouhani, about the need to preserve the nuclear deal in the face of provocations from the US. On Saturday he meets Turkey’s president, Reccip Erdogan, for talks that will range widely over curbing migration flows, the Turkish incursion into northern Syria and its drilling activity in Cypriot waters.

China coronavirus death toll reaches 26 as cities locked down 16:39
Doctors give all clear for 14 people tested for coronavirus in UK 16:38
Tens of thousands march in Baghdad to demand US expulsion 14:51
Six killed, several injured in shooting in Germany, police say 14:38
Trump swept up by ‘bogus’ Ukraine theory, impeachment trial told 10:18