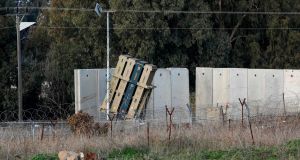 The new system will be used initially to intercept short-range rockets, and will operate in tandem with Israel’s multi-tiered air defence systems including Iron Dome (above). Photograph: Jalaa Marey/AFP via Getty Images

Israel has announced a technological breakthrough that uses laser technology to intercept missiles, describing the development as a “game-changer that will alter the strategic reality”.

The new laser-based system is designed to intercept rockets, mortar shells, artillery projectiles, drones and anti-tank missiles. It will undergo further testing in the coming months with the goal of deploying it along the Gaza border next year.

Israel has been developing the cutting-edge technology for more than a decade and a number of successful tests have already taken place.

At this stage, the system’s capability is aimed at operating against rockets up to a range of 40km, as well as against mortar shells at short ranges, various anti-tank missiles, and different kinds of small aircraft.

“We managed to combine dozens of laser beams to the same target, so theoretically, there is no limit to the number of targets that can be intercepted,” said the statement issued by the defence ministry. The system itself is completely autonomous, and no human intervention is required in performing the interception.

The laser-based interception, which is silent and invisible, is based on electric laser technology rather than the chemically based lasers used up to now.

In the future, the security establishment believes, lasers will be able to intercept rockets at a distance of hundreds of kilometres.

The main advantage of the laser technology is its cost. Even though each system will cost hundreds of millions of euro, after that each laser interception will cost only a few euro, compared with the conventional Iron Dome, which costs about €44,000 per interception.

The new system will be used initially to intercept short-range rockets, and will operate in tandem with Israel’s multi-tiered air defence systems: Iron Dome, David’s Sling, Arrow and Patriot.

Israel faces a significant rocket threat on both its northern and southern borders.

The Shia Hizbullah, backed by Iran, has an estimated 150,000 rockets aimed at Israel on Lebanese soil, including long-range projectiles that can reach most of Israel.

In Gaza, Hamas and the Islamic Jihad also have tens of thousands of projectiles, with some able to reach as far as Tel Aviv.

“The investments made in recent years positions Israel among the leading countries in the powerful laser sphere.”