Transport strikes to continue for 37th day, the longest industrial action since May 1968 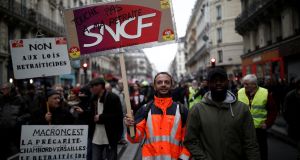 French transport strikes will continue for the 37th consecutive day on Friday, following a fourth day of nationwide marches on Thursday in protest against President Emmanuel Macron’s reform of the pension system.

There is no sign of agreement between trade unions and the government, and the stalemate looks set to continue for the foreseeable future, with severe disruption of public transport.

The hardline CGT union claimed 370,000 people marched in Paris on Thursday. The interior ministry said there were 56,000 demonstrators in the capital.

Philippe Martinez, the leader of the CGT, which dominates the state-owned SNCF railway company, denounced the “provocative attitude” of the government. “Between the government’s PR, which is, ‘We’re in discussions. Everything is open,’ and the reality, one must wonder if the government really wants to talk, to take account of the opinion of the unions.”

The government is moving ahead with the reform despite the mass protests. It has submitted a draft law to the country’s constitutional court for presentation in cabinet on January 24th, and intends to submit the reform for two weeks of debate in the lower house of the French parliament from February 17th.

The government claims to have carried out two years of concertation before initiating the reform. Yet in more than five weeks of strikes and demonstrations, there has been little or no progress on six main areas of disagreement.

The areas of disagreement concern the legal retirement age, pension rates, the absence of an impact study, the fate of civil servants and the “special regimes”, the future of reserve funds accrued by specific professions, and allowances for difficult working conditions.

The age of retirement is doubtless the stickiest issue. The government says that 62 will remain the legal age, but it wants to dock the pensions of employees who retire before a “pivot age” or “age of [budget] equilibrium” of 64.

The moderate CFDT, the largest union, which otherwise supports Mr Macron’s plan for a universal points system, has made the “pivot age” its red line. CFDT leader Laurent Berger this week proposed that the government convene a conference in the spring or summer on financing the pension system.

Prime minister Edouard Philippe said the conference was a good idea. Union leaders and business management will meet at the prime minister’s office on Friday “to agree on the mandate of this conference and on the amount of time it will have to reach consensus”, Mr Philippe said.

In response, Mr Berger asked Mr Philippe to announce that he is withdrawing the “pivot age” from the draft law. “We do not want to get involved in a mean and stupid plan to reach [budgetary] equlibrium over the short term, based on working longer,” he said.

Negotiations stopped while the strikes continued over the holidays. Millions of French people were forced to change travel plans.

The public seems to blame both sides for the inconvenience. Mr Macron’s approval rating has dropped to 25 per cent, compared to the mid-30 percentile range before the strikes.