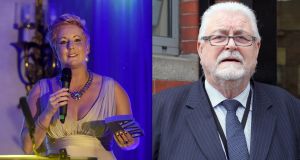 SNP MP Hannah Bardell and Lord Ken Maginnis. He was quoted as saying: ‘Queers like Ms Bardell don’t particularly annoy me. Okay, she’s got her cheap publicity out of it.’ Photographs: Antony Jones/Getty Images for Diva Magazine and Niall Carson/PA Wire

The Metropolitan Police has confirmed it is investigating an “allegation of hate crime at the House of Commons” after a Scottish MP was described as “queer” by a Northern Ireland peer.

SNP MP Hannah Bardell said she was approached by the police following media coverage of Ken Maginnis’s remarks, and spoke to them on Thursday.

“They are recording it as a crime, and are looking into it as a possible hate crime,” she told The Irish Times. “They are taking it very seriously.”

Lord Maginnis was quoted by the HuffPost news website as saying: “Queers like Ms Bardell don’t particularly annoy me. Okay, she’s got her cheap publicity out of it.”

Lord Maginnis made the comments in an interview with deputy editor of HuffPost UK, Arj Singh, who released an audio recording of the interview on Thursday.

A spokesman for the Met said its “Parliamentary Liaison and Investigation Team is looking into an allegation of hate crime at the House of Commons made to them on Thursday, January 9th.”

Ms Bardell said she was in no doubt the remark was a “homophobic slur” and that it had been “deliberately used against her in a homophobic way”.

She described the response within the Commons as “very robust”, saying that the Speaker of the House had phoned her to express his “anger and dismay” at the alleged comment, while Jacob Rees-Mogg, the Leader of the Commons, told the House that “the attack on the honourable lady was unutterably disgraceful and she is clearly owed an apology by the noble lord for what he said about her.

“I think everybody who heard about that was shocked by the comments that he is reported to have made and has not denied. I think they are really appalling,” Mr Rees-Mogg said.

Here is Lord Ken Maginnis calling @HannahB4LiviMP "queer" on Wednesday, after she raised his "abuse" of parliamentary security staff. Today, he has been trying to deny that he said this. Well he did, as you can hear. https://t.co/dfxXKlpc8b

On Wednesday, Ms Bardell alleged in the Commons that Lord Maginnis had verbally abused security staff in parliament after he had forgotten his security pass.

She said she had “witnessed one of the worst cases of abuse of security staff that I have seen in my time here”.

Lord Maginnis, she said, “proceeded to verbally abuse and shout at both the members of [security] staff, calling them ‘crooked’, saying ‘did they not know who he was, he’d been here 46 years’, and refusing to take the advice and assistance of both myself, the security staff and the police that then attended.”

Speaking on BBC Radio Ulster’s Talkback programme on Thursday, Lord Maginnis said his pass had been in his briefcase but health issues made it difficult for him to stand and he was unable to remove it from his case.

“I got a little bit bad tempered,” he said. “The next thing this Scottish lassie, I forget her name, I’ve never seen her before, she was there and she stood up in the House of Commons and made a scene about my being bad tempered which was quite true, but it’s very strange. She must have an ulterior motive.”

He also said Ms Bardell’s statement was “an exaggeration in order to make an impression” but that “yes I did tell him to catch himself on, that he was being crooked . . . he wanted to impede my entry into the House”.

Ms Bardell said the “insinuation” behind Lord Maginnis’ remarks were that she had deliberately attacked him because of her own sexual orientation and his views on abortion and same-sex marriage. She said she was unaware of this, and had raised the issue in the Commons because it was her duty to do so.

“The fact that he thought he could do and say what he did so indiscriminately, that’s not okay,” she said.

If Lord Maginnis “is not able to conduct himself properly, he should retire,” she said.

A former member of the UUP and the MP for Fermanagh and South Tyrone, Lord Maginnis resigned from the UUP in 2012 after he was criticised for describing gay marriage as “unnatural” and “deviant”.

A spokesman for the House of Lords said that for reasons of confidentiality, they could not confirm nor deny whether or not a complaint had been made about the incident.

In a statement, the spokesman said: “Parliament has a clear behaviour code which defines what is and isn’t an acceptable way to behave. All members of staff have the right to work in an environment free from abuse or bullying.

“Unacceptable behaviour will be dealt with seriously, independently and with effective sanctions.”

Ms Bardell said that since the incident she had received “numerous emails” from parliamentary staff who thanked her for “standing up” for them.

“Several people have outlined the specifics of the way they’ve been treated and I was really shocked by it,” she said. “They said it felt good that somebody was raising it.”

Ms Bardell said the response to the incident demonstrated a “change in attitudes” in parliament, and that she hoped a “change in culture” would soon follow.

“I was pretty upset, pretty shaken by it because I could run into this guy any time in my workplace,” she said.

“There are LGBT people across the country, probably especially in Northern Ireland, who face this on a daily basis.