London Letter: Liberal Democrats aim to channel Brexit opposition into support for them 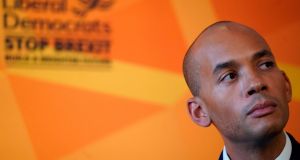 The event at the Glaziers’ Hall near London Bridge was billed as the launch of the Liberal Democrats’ policy on equality and human rights but its real focus was on the failings of Labour and the Conservatives.

Luciana Berger and Chuka Umunna, who left Labour in January to form The Independent Group (later Change UK) before joining the Liberal Democrats in the summer, trained much of their fire on Jeremy Corbyn.

Berger, who faced appalling anti-Semitic abuse as a Labour MP and was given a police escort when she went to the party conference, said Corbyn had betrayed the values of equality and anti-racism.

“As a party with anti-racist history, never did I think that I would be forced out of the Labour Party because of anti-Jewish racism. But that is what has happened and I’m not the only one,” she said.

“Jeremy Corbyn’s leadership has changed everything. I went from being a Labour MP to being seen as a Jewish MP – one that was at the receiving end of storms of anti-Semitic insults and harassment. The problem is that the tone is set from the top. Jeremy Corbyn and his team have created a party machine which protects and normalises anti-Semitic ideas and individuals.”

Britain’s Equality and Human Rights Commission (EHRC) is investigating allegations of anti-Semitism in Labour, the first time the statutory body has launched such an inquiry into a political party since it investigated the far-right British National Party (BNP) in 2010. Berger called on the commission to publish its findings before the general election on December 12th.

“In any other circumstance this catalogue of disgrace would prompt the resignation of a party leader. Instead, good Labour people tweet their outrage at what is happening in their party, but continue to sponsor not only Jeremy Corbyn’s leadership, but him becoming prime minister at this next general election,” she said.

Corbyn has condemned anti-Semitism as a poison and claimed that new procedures have improved his party’s response to it. He has also apologised for making a Facebook comment criticising the removal of an anti-Semitic mural, saying he had not looked at it properly.

Actor Eddie Marsan said Corbyn was “either anti-Semitic or ignorant”, adding that he had switched his support from Labour to the Liberal Democrats, an experience he described as “a political enema”.

The Conservatives expelled some members this week for posting anti-Muslim social media messages as Boris Johnson faced criticism for broadening a planned inquiry into Islamophobia in the party to include prejudice more generally. Umunna said that both of the big parties had failed to defend values of equality and human rights.

“Given recent history, events and painful personal experiences of what it is to be a member of Jeremy Corbyn’s Labour Party, we believe Labour lacks the moral authority and ability to defend our country against the forces of reaction, hate and division. The same is true of the Conservatives. That is because you need only look at what has happened in those parties these last few years to see that they are part of the problem,” he said.

Both Umunna and Berger are fighting three-way contests in Conservative-held London seats where the Liberal Democrats came a distant third in 2017. They are hoping that their high profile will help to channel opposition to Brexit into support for their party.

Labour warns that, by splitting the anti-Brexit vote, the Liberal Democrats will allow the Conservatives to hold seats they might otherwise lose and gain seats Labour won narrowly two years ago.

In Canterbury, which Labour’s Rosie Duffield, an enthusiastic advocate for a second referendum, won in 2017 with a majority of 187, the Liberal Democrat candidate withdrew last week but was replaced and disciplined by the party.

Almost all of the Liberal Democrats’ target seats are held by the Conservatives but they need to attack Labour to reassure wavering Tory voters that they will not help to put Corbyn into Downing Street. Liberal Democrats continue to mouth the official line that their leader Jo Swinson could become Britain’s next prime minister.

But Umunna made clear that the party is preparing for another hung parliament, suggesting that it mattered less which party formed the government than how the majority of MPs would vote on putting Brexit to another referendum.

“Unless you depress the number of Tories, you can’t get a people’s vote,” he said.