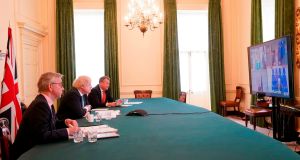 Michael Gove: “The UK’s customs territory is not altered as a result of the protocol, and unfettered access is one of the clear provisions within the protocol.” Photograph: Andrew Parsons/10 Downing Street/AFP via Getty Images

Michael Gove has promised that businesses in Northern Ireland will not need to complete exit summary declarations when they send goods to the rest of the United Kingdom after the end of the post-Brexit transition period on December 31st.

He rejected the European Union’s assertion that the Northern Ireland protocol requires such declarations and warned that unionists would reject the new customs and regulatory regime if it was too bureaucratic.

“The argument we’re making to the EU as well is, if you insist on significant new infrastructure and a significant new presence, what you will do is actually make the protocol less acceptable to the majority community in Northern Ireland and therefore you run the risk of the protocol being voted down in a future election,” he told the House of Commons Northern Ireland affairs committee.

EU chief negotiator Michel Barnier repeated earlier this month that the protocol demands that goods moving from Northern Ireland to the rest of the UK must be accompanied by an exit declaration.

This is to comply with the EU customs code which will be followed in the North from January 1st next year and which requires more elaborate declarations as well as checks on goods moving from Britain to Northern Ireland.

Mr Gove repeatedly declined to say whether goods moving from Britain to Northern Ireland would require entry declarations, although his government acknowledged last year that they would. The protocol provides for a vote in the Northern Ireland Assembly in four years’ time to determine if the arrangements should remain in place and Mr Gove said that too bureaucratic a system could lead to them being rejected.

“The UK’s customs territory is not altered as a result of the protocol, and unfettered access is one of the clear provisions within the protocol. This takes me to the heart of the approach we take towards the protocol,” he said.

“The burdensome bureaucracy associated with it are as light as possible that would de-dramatise any vote in four years time because if the protocol is seen to be working it’s more likely the alignment provisions can be accepted. If it’s the case that it were imposed in an over bureaucratic and burdensome manner that would lead inevitably I think to a greater degree of disquiet than it may have already generated.”

Although businesses in Britain will have until July 2021 to adapt to any post-Brexit customs regime, the changes in Northern Ireland will come into effect in the middle of January.

Aodhán Connolly, director of the Northern Ireland retail consortium, said the government were “asking the NI business community to answer an exam question when they have only given us the front and back cover of the textbook”.