Nil-all at half time in tortuous Brexit talks 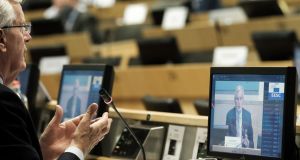 A timetable for the second half of Brexit talks has been set out with six rounds of negotiations to take place between June 29th and August 21st. Photograph: EPA/Olivier Hoslet

Life seemed to pause in February, and this seems to have affected the perception of time. Incredibly, half of 2020 is gone: and that means just six months remain before goods sold into Britain will be subject to border checks, customs declarations, and possibly tariffs.

These onerous changes will come into force no matter what deal is agreed between London and Brussels, and indeed if no deal is agreed at all. They are expected to have a heavy impact on companies in the Republic, and any businesses across the EU dependent on exports to Britain. Firms have been asked to prepare as a matter of urgency.

The British government has said, definitively, that it will not extend the transition period. Instead, it proposes to introduce the border requirements in stages. Checks on live animals will come into force right away in January. Pre-notification and health certification for meat, dairy, and other animal products will come into force from April. Full checks and declarations will be in place from July. For the first half of the year, companies will have a grace period to make customs declarations for their goods and pay whatever tariffs are required.

Since February, talks between Britain and the European Union have continued over video calls to try to hash out a deal that avoids the harshest outcome of an automatic shift to World Trade Organisation trade terms on January 1st. The state of the talks now could be described as nil-all at half time. Both teams have played defensively and sat deep on the pitch; neither has conceded, no one has scored.

The second half British prime minister Boris Johnson will

join a video conference on Monday with the presidents of the three European institutions of the commission, council, and parliament: Ursula von der Leyen, Charles Michel, and David Sassoli. Earlier this year, Britain was warning that it could use this moment to dramatically walk away from talks and declare it would spend all its energy on preparing for World Trade Organisation terms. It has shifted away from this approach, instead pushing the EU to enter intensive talks next month.

A timetable for the second half has been set out: six rounds of negotiations are to take place between June 29th and August 21st. Negotiators will alternate between physical meetings in Brussels and London as long as national health guidance allows it, but talks could shift online again.

What the EU is seeking in the talks was decided by the 27 remaining members of the EU and given to chief negotiator Michel Barnier in a 46-page mandate in February.

He has updated the member states and the European institutions throughout the talks, as any shift or concession by the EU side can only be given with consensus agreement.

No change to the mandate is needed to get an agreement, he told the European Parliament last week. “We can find the necessary compromises, on the condition that the UK changes its approach,” the Frenchman said.

There are four stubborn areas of disagreement. One is the so-called level playing field: the EU’s ambition to ensure fair competition between British and EU countries. Brussels will not grant British companies free access to EU markets if they can undercut local businesses; it will only do so if they are required to follow equivalent standards on, for example, labour and the environment. This is anathema to Britain, as it sounds like signing back up to the kind of regulatory restrictions it left the EU to escape.

Too bad, Brussels responds: no free access for your businesses to the single market then.

Another issue is fisheries. In a nutshell: Britain wants to take back exclusive rights over its territorial waters. These would give it far more fish than the British could eat. Want to sell fish to the EU? Fine, says Brussels, but only if EU fishing boats can have access to British waters. The EU side wants to stick to the existing quota system for this; Britain wants to introduce yearly access talks.

On policing and judicial cooperation, Britain does not want to continue to follow EU data protection standards, and shies away from an agreement with the EU on human rights, which it says has no place in a trade deal. The final issue is governance: ie, how disputes could be mediated. Britain does not want the ultimate authority to be the European Court of Justice; the EU insists this is the only body that can rule on matters of EU law.

British negotiators can sound somewhat indignant at the EU’s insistence on written and legal guarantees on matters such as standards and human rights, insisting that Britain has high standards, and should be trusted, rather than treated as a potential violator.

The EU accuses Britain of continuing to not accept that negative consequences are inevitable from Brexit, and of demanding privileges that are only available to member states. The British negotiators accuse the EU of failing to accept its sovereignty, and of asking for things that go far beyond previous trade deals with countries like Japan or Canada. Brussels rejects this comparison,  explaining that Japan and Canada are far away, so don’t have the ability to undercut the EU that Britain could have.

Brussels believes it has the upper hand, because if Britain chooses not to compromise and to go for World Trade Organization terms, the same EU negotiating mandate will await them if they return for talks to ease the tariffs. There is some flexibility on details, but the principles will not shift.

“The United Kingdom chose to become a third country. It cannot have the best of both worlds!” Barnier put it to parliament.

“We want a very ambitious economic partnership, but it must reflect the long-term economic and political interests of the EU. This is not a dogmatic or technocratic position,” he added.

“Simply: we will never compromise on our European values or on our economic and trade interests, to the benefit of the British economy.”