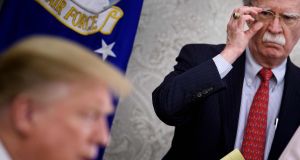 John Bolton listens as President Donald Trump speaks to the press in the Oval Office of the White House in Washington in May last year. Photograph: Brendan Smialowski/AFP via Getty Images

US president Donald Trump has reacted with fury at leaked excerpts from a book by his former national security adviser John Bolton, which contain damaging allegations about the president including that he offered bribes to dictators.

The book, which is scheduled to be published next week, claims that Mr Trump assured Turkey’s president Recep Tayyip Erdogan that he would intervene in a case involving a Turkish company.

It also alleges that Mr Trump asked Chinese president Xi Jinping to increase the country’s purchase of US products to help his re-election. Similarly, he indicated he supported Beijing’s incarceration of Uighur Muslims, the book claims.

It is unclear if this allegation impacted on Mr Trump’s move this week to sign a law allowing him to impose sanctions on Chinese officials involved in the mass incarceration of Muslim minorities.

The Room Where it Happened also offers fresh details about the Ukraine affair which led to Mr Trump’s impeachment in February.

Mr Bolton writes that the president withheld almost $400 million in aid to Ukraine in exchange for the government committing to opening an investigation into his political rival Joe Biden.

According to Mr Bolton, secretary of state Mike Pompeo and defence secretary Mark Esper tried to persuade the president to release the congressionally-approved aid to Ukraine between eight to 10 times.

Among the other assertions in the book is that Mr Trump wanted to send a recording of Elton John’s Rocket Man to North Korean dictator Kim Jong-un, and he once asked if Finland was part of Russia.

As several US media outlets published excerpts from the book, Mr Trump attacked his former top national security adviser on Twitter on Thursday, calling him “dumb” and expressing regret for not having fired him earlier.

“Bolton’s book, which is getting terrible reviews, is a compilation of lies and made up stories, all intended to make me look bad,” he tweeted. “Many of the ridiculous statements he attributes to me were never made, pure fiction. Just trying to get even for firing him like the sick puppy he is!”

Mr Bolton, a well-known conservative who was a central figure in the US decision to go to war in Iraq during the George W Bush administration, served as Mr Trump’s national security adviser for 17 months.

He declined to appear before the House of Representatives’ impeachment inquiry late last year, after the White House blocked his appearance. He subsequently offered to give evidence to the Senate trial, but this was blocked by the Republican-controlled chamber.

Senior Democrats in Congress have suggested that they may subpoena Mr Bolton to appear before Congress about some of the allegations made in the book. South Carolina Democrat Jim Clyburn said the House of Representatives ought to consider it.

While Mr Bolton’s book is due to be published next week, the Trump administration has been locked in a legal fight to ban its publication. On Wednesday night, the department of justice lodged a last-minute appeal to a judge to issue an emergency order blocking the publication of the memoir.

White House officials claim that Mr Bolton, who held one of the most senior positions in the administration, is using confidential national security information in his book. But the book itself has already been shipped to vendors and reviewers ahead of its June 23rd publication date.

A civil lawsuit lodged against Mr Bolton on Tuesday by the justice department aims to target the former adviser’s proceeds from the book.

In a statement, Simon & Schuster, Mr Bolton’s publisher, called the court filing “a frivolous, politically motivated exercise in futility. Hundreds of thousands of copies of John Bolton’s The Room Where it Happened have already been distributed around the country and the world. The injunction as requested by the government would accomplish nothing.’’

1 Coronavirus: Unwinding of latest stage of roadmap ‘could be pushed back further’
2 UK accuses Russia of election interference and trying to steal Covid-19 vaccine
3 Coronavirus in Ireland: Further reopening delayed amid 'worrying' rise in infection rates
4 Muslim group seeks permission for Croke Park Eid event to go ahead
5 The downing of a minister: How Barry Cowen went from hero to zero in just twelve days
Real news has value SUBSCRIBE